Deadwood In My Blood: Boone May, Gale Hill, Shotgun Messengers on the Deadwood Stage, and Their Historic Families 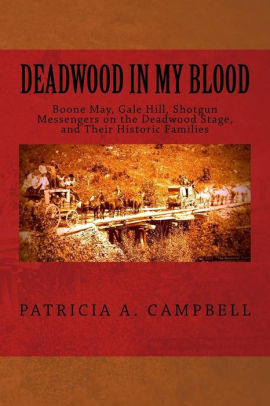 Volume 2 features U.S. Deputy Marshal Boone May, the most famous shotgun messenger working for the Deadwood Stage. He was the protector of Robbers’ Roost Station. He was the most feared lawman by road agents on the Deadwood Trail. Historians will be excited to learn about Deadwood’s most lethal gunslinger, Boone May, and his family connections to other historical Wild West icons, such as the legendary outlaw Jesse James, and legendary lawman U.S. Marshal Bass Reeves. The author gives first hand family accounts about Boone May and his family. I located a velvet photo album full of cabinet cards and tintypes in the loft of an old barn which are featured in the series. Th

is story is about two pioneer families that produced half of the first “elite eight” guards employed to protect the Deadwood Stage in 1876. Shotgun messengers Gale Hill, Boone May, Jim May, and Bill

May had been overlooked for more than a century, according to many historians familiar with early Deadwood. Boone May was undoubtedly the most active shotgun messengers employed by the Black Hills Stage and Express Company, during the height of the Gold Rush.

All seats were filled and every ticket bought during the early days. Often the coach was filled to capacity both inside and on top by anxious passengers seized with gold fever. If it was cold, the stagecoach company provided buffalo blankets, and threw them over the passengers to keep them warm. Apparently, there was also a way to keep hot embers in the metal box under their feet, when it wasn’t carrying treasure.

The Black Hills Stage and Express Company owners were Jack Gilmer, Monroe Salisbury, and Mathewson Patrick. Today, it’s more commonly called the Deadwood Stage. The company established its headquarters in downtown Cheyenne. Three general operations comprised the business. The main business office included the Black Hills Telegraph Company and Stage Office for passengers. Across the street inside the train depot was the Cheyenne Post Office and Black Hills express office. The largest of the three areas contained the barn and livery. This was where they stored and maintained the shiny red Concord stagecoach fleet, manufactured by Downing and Abbot Company. Each horse in the fleet was given their own hand-crafted harness. The purpose of this was to decrease the time along the route when changing teams. Stock tenders would have a fresh team ready for the coach at each station.

Luke Voorhees also sent regular telegraphs to Fort Laramie. The coach stopped at Fort Laramie every trip to change horses. The stage crossed the Fort Laramie Bridge as it headed north to Deadwood. The steel construction bridge, which was used by the stagecoach, is slightly north of today’s historic site. The narrow bridge was just wide enough for the stagecoach, and sturdy enough to withstand fortified military wagons.

In Cheyenne, Luke Voorhees’ main office on 16th Street was the ticket office. This is the office where passengers purchased their tickets to ride the stagecoach. The trailhead at their headquarters in Cheyenne was adjacent to the Cheyenne Depot.
Inside the Cheyenne Depot were: the Union Pacific Express Office, the Black Hills Express Office, and the U.S. Post Office. Cheyenne’s postmaster was Herman Glafcke.

The third area the company occupied (and their largest area in downtown Cheyenne) was the lot which contained the livery and barn. Spring relates, “Voorhees opened the main stage office in Cheyenne just west of the new Inter-Ocean hotel on Sixteenth Street, and an office for express, at the Union Pacific depot. The stage barn and corrals, enclosed by a high lumber and log fence, were on the northeast corner of the intersection of 20th and O’Neil streets, on lots 3, 4, 5 and 6 of block 269.”

After the first season, the line boasted it could travel the entire 145 mile trail in 24 hours using new shortcuts to the Black Hills. The coach made short stops along route, designed to keep the line running efficiently. Stage stations were erected every 10-15 miles, and the stock tender changed teams at each station. Sometimes they changed drivers and guards. If a weary passenger needed rest, they could board a later coach. Motion sickness was the prevalent reason why a passenger needed rest.

An outrider was typically provided his own string of preferred horses, and guarded from the rear. The outrider would follow behind the coach about a quarter-mile.

Guards, like the debonair Boone May, could quickly ride up, “pistols blazing”, shooting at bandits trying to rob the stagecoach. Riding as an outrider in “drag” behind the coach, generally meant you ate some dust. It was common to wear a red bandana around the neck, which was easily placed over the mouth when needed.

The Deadwood Trail will be celebrated in 2026. My current project is providing detailed newspaper accounts about the twenty-two holdups between 1876-1881. I fully cite my work.
Experience, Credits and/or Awards:

I’m a new author. My family connections to the authentic Deadwood Stage has provided me with access to leading scholars in history. They are interested in these men in my family.
Excerpts from Reviews or References: