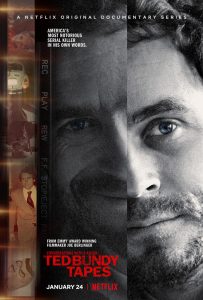 Netflix offers an intimate look at Ted Bundy, perhaps the world’s best-known serial killers, in a four-part docuseries which began airing January 24, 2019, on the anniversary of Bundy’s execution in Florida.

As a smart, good looking young law student, Bundy got away with brutally killing 30 or more women before being caught in 1978. His personal charm allowed him to hide in plain sight and even to escape prison twice.

The Netflix series adds a new understanding of Bundy’s twisted personality from the little-known recordings in his own voice. “I’m not crazy,” viewers hear Bundy shockingly say in the series. “I’m just a normal person.”

Bundy began partly confessing his crimes in 1989. But, in the 1980 tapes, journalist Michaud had coaxed Ted to talk about himself in the third person. It was in these recordings that Bundy’s blood-thirsty, misogynistic personality surfaced.  Hearing the killer analyze his own life and motives as if he is talking about someone else, lends chilling insights into his deranged mind.

By giving Michaud and Aynesworth hours of detail about his crimes, the psychopath hoped for a delay of execution. According to Michaud, “Ted didn’t want to die.”

The program is sure to leave a lasting impression on audiences everywhere, making one think twice about whether they really know their neighbor or friend.

Stephen Michaud and Hugh Aynesworth are also the authors of The Only Living Witness, a companion book to Conversations with a Killer about Bundy.  Both are authors of other works as well.

(Editor’s Note:  Authorlink is the publisher of the in-print book, TED BUNDY: CONVERSATIONS WITH A KILLER,  which inspired the series, and was involved in negotiations together with CAA for the film rights.)