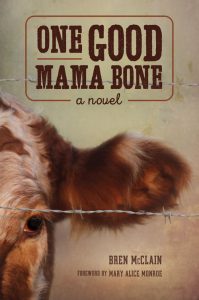 New York, January 20, 2019 (Updated) – The Willie Morris Award for Southern Fiction named the recipient of its 2017 literary award: Bren McClain for her novel One Good Mama Bone (Story River Books), , McClain was honored October 18, 2018, at a ceremony at the New York Yacht Club where she received the award’s $10,000 prize. Author Ann Kidd Taylor received Special Recognition at the ceremony for her novel The Shark Club, for its originality and insight.

Since its inception in 2008, the Willie Morris Award for Southern Fiction, founded by novelist Reba White Williams and her husband Dave H. Williams, has recognized annually a writer whose work is set in the South, exemplifies the tenets of Southern literature—quality of prose, originality, and authenticity of setting and characters—and reflects, in the words of Willie Morris, “hope for belonging, for belief in a people’s better nature, for steadfastness against all that is hollow or crass or rootless or destructive.”  Past recipients include Mindy Friddle, Stephen Wetta, Terry Roberts, Katherine Clark, and Kim Wright, 2016’s honoree for her novel, Last Ride to Graceland.

2017 award winner Bren McClain is a native South Carolinian, who now resides in Nashville, TN. One Good Mama Bone is her debut novel and in addition to widespread acclaim was also a finalist for both the Southern Book Prize by the Southeastern Independent Booksellers Alliance and the 2018 Crook’s Corner Book. She is a two-time winner of the South Carolina Fiction Project and the recipient of the 2005 Fiction Fellowship by the South Carolina Arts Commission. She is now at work on her next novel, Took, which received the gold medal for the 2016 William Faulkner –William Wisdom Novel-in-Progress.

On learning that One Good Mama Bone won the 2017 Willie Morris Award, McClain said, “I wrote the book of my heart, held it up to the world and said Here’s what I think is beautiful. And for that beautiful to be honored in this glorious way is an humbling like no other.”

“Like all the best Southern fiction, One Good Mama Bone is about the mysterious, powerful bonds of family and the eternal longing for home,” says judge Clair Lamb. “Bren McClain finds the universal in a very specific story about two mothers — one human, one animal — equally committed to their offspring. It’s a book that lingers in both the mind and the heart.”

New to the ceremony this year was a panel of distinguished guests honoring the life and writings of Pat Conroy. The panel, moderated by Jonathan Haupt, executive director of the Pat Conroy Literary Center, included Conroy’s widow Cassandra King, president of Farrar, Straus & Giroux, Jonathan Galassi, and Willie Morris judge, past recipient, and author of Conroy’s oral biography My Exaggerated Life, Katherine Clark. “Our Willie Morris Award shows a similar interest to the Pat Conroy Literary Center, recognition of and promoting the best of contemporary southern fiction,” remarked Dave Williams.  “So, it seemed only natural that we collaborate with them on a panel celebrating those shared interests. We are pleased and honored to have had them play such a special role in this year’s award ceremony.”

Reba and Dave Williams were inspired to create the Willie Morris Award for Southern Fiction in 2008 after Reba learned that her two nieces in high school in Charleston, SC had never read Harper Lee’s To Kill a Mockingbird.   Reba, who was born in Mississippi and raised in North Carolina, remembered how her own introduction to classic Southern novels as a young student sparked a lifelong love and appreciation for Southern literature and its unique style, elaborate prose, evocative language, and sense of place. Envisaging the future of the Southern literary tradition, Reba decided that Southern writers and novels—especially contemporary works—deserved more attention.  The result was the Willie Morris Award, named for celebrated Southern writer and long-time Williams family friend Willie Morris.  A native of Yazoo City, Mississippi, Morris was a journalist, editor-in-chief of Harper’s magazine, and author of several novels set in the South, some of which remain required reading in public schools in his home state.

Authors, agents, publishers, and booksellers are invited to submit books for consideration. The winner is selected by a prestigious panel of academics and writers, including previous award winners.  In addition to the $10,000 prize, recipients receive an all-expenses-paid trip to New York City to attend a luncheon and reception in their honor, joined by nearly 100 members of the Southern literary community and New York City publishing community.

The Willie Morris Award for Southern Fiction is now accepting submissions for the 2018 prize, to be awarded in 2019.