Her Fugitive Heart by Adi Tantimedh 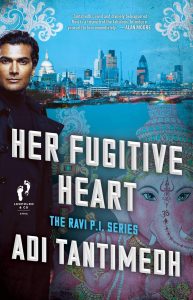 Life is never boring for Ravi Chandra Singh, ace private investigator at Golden Sentinels Agency and plaything of the gods of India. The gods thoroughly approve of Ravi’s career. Ravi would prefer career to mean the orderly course of his professional life, and not the gods’ definition to travel at top speed in a headlong manner. They like to hang around and watch as everything comes apart at the seams which, given the cheerfully amoral antics of Ravi’s colleagues at Golden Sentinels, is quite often.

…a caper story in the best sense of the term.

Their latest case sees the agents working an important event at an English country house on behalf of their boss, Roger Golden, as he brings a long-planned scheme to fruition. Ravi and the gang don’t know what Roger’s scheme is, but fear it will be something more than normally fraught with danger. They’re proved right when the event turns into a drug-fueled nightmare for the guests—and that’s only the beginning of Ravi’s troubles. A psychotic media heiress, a top terrorist missing in the heart of London, an old client with a wayward sister, all conspire to keep Ravi busy. When Roger’s scheme explodes bringing chaos to the British and American governments, Ravi struggles to keep everything from falling apart. Somewhere in the middle of it all he has to marry his sweetheart Julia and come to terms with his new status as the gods’ shaman…

Her Fugitive Heart, the third book in the Ravi PI trilogy, doesn’t fail to please. Tantimedh has created a caper story in the best sense of the term.

Friends on a Rotten Day by Hazel Dixon-Cooper

Guilt by Association by Marcia Clark

The Enchantress of Florence by Salman Rushdie