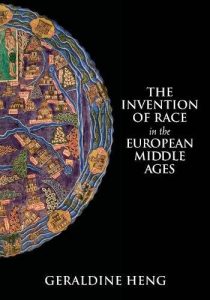 The Invention of Race in the European Middle Ages
Geraldine Heng
Cambridge University Press 2018
“The Invention of Race in Middle Ages” challenges “race theorists” who claim “race” identification is a modern phenomenon. Rather, as author Geraldine Heng’s research back to European Middle Ages reveals, it was actually then that different race distinctions emerged: Religious, colonial, cartographic, and epidermal. Most controversial, she notes case studies showing dark-skinned people tend to fall lower on economic scales.
Hang recalls her first encounter was as a child, as a Chinese female in Singapore, she questioned why “white people lived in the mansions with manicured grounds tended by Asian servants.” As a academic, she pursued her key question: Is “race-making strategic,” simply a method to distribute positions of power differentially to specific human groups, or for the construction of a hierarchy of people for differential treatment.
Her esoteric and extensive research suggests economics, rather than skin color, may be the driving force behind categorizing populations by different races. She focuses on the European Middle Ages (12th to 15th centuries), examining the interplay between the past and present in the way Jews, Muslims, Africans, Native Americans, Mongols and the Romani have been categorized.
“Religious race” emerges as an “identifier of human differences,” she discovers. And class plays a role: Whiteness is noble, but black is not, so those with lighter skin are of higher economic status. And a central question: “Do race and religion become irrelevant and of scant import when the world is viewed as a network of goods and trading relations, webbed by the dynamics of mercantile capitalism and driven by profit motive?”
In the last chapter, Heng zeroes in on a least studied population, the Romani, often referred to in modern times as “Gypsies.” Heng reviews their passage from India to Europe, first treated with compassion, but later when their traditional services such as agriculture, metal work, and leather work was not in demand, Romani adopted other trades such as fortune telling, music and entertainment. She notes case studies to illustrate that the Romani’s behavior and personality were added as factors to skin color when they were identified as a special race. And did the classification encourage discrimination against the Romani?
Heng should be applauded for venturing into such controversial theories. Clearly, after reading her research on race identification, I will not ignore the probability that race identification is driven foremost by economics or even worse, by greed. This may not have been Heng’s intention but she nevertheless has raised awareness on between race classification and “racism” that was quietly ignored. She challenges other scholars, stating her work is a spark to encourage further review.

Walking with Abel by Anna Badkhen

A Murderous Procession by Ariana Franklin

There We Stood, Here We Stand by Timothy Drake