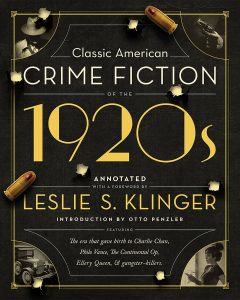 Sir Arthur Conan-Doyle set the gold standard of detective fiction with his Sherlock Holmes stories, and for many years Conan-Doyle and other British crime writers, such as Agatha Christie, dominated the genre. In the 1920s American crime writers appeared on the scene with a distinctive style all their own. They brought to the world such unique characters as the suave aristocrat Philo Vance, the Japanese-American cop Charlie Chan, the tough two-fisted Continental Op, the cerebral Ellery Queen, and the mobster anti-hero gunman Rico, characters who entertained the reading public for decades.

This anthology has a comprehensive foreword on the subject, and it covers five of the most popular detective novels of the day in opening chapter excerpts set in their original form. Each work has notes on the history, background, culture of the time and the illustrations produced for the first editions. The reader is introduced to the work of Earl Derr Biggers, S. S. Van Dime, Dashiell Hammett, W. R. Burnett, and Frederick Dannay and Manfred B. Lee writing as “Ellery Queen.” An extensive bibliography gives plenty of suggested material for those wishing to expand their knowledge of the genre.

The Cure For Modern Life by Lisa Tucker

The Lake of Dreams by Kim Edwards

Legend of the Rainbow Warriors by Steve McFadden