The Ghost Photographer by Julie Rieger 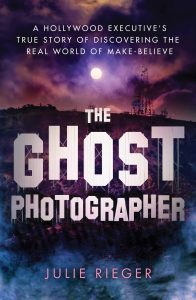 Julie Rieger’s career in Hollywood has taken her to the top of the ladder. As head of media at 20th Century Fox she’s responsible for marketing big blockbuster movies—and in her private life she encounters things much stranger than even Hollywood can conceive.

A self-confessed diehard skeptic with Oklahoma in her blood, the death of her mother Margaret opened up a whole new paranormal world for Julie. The discovery that life and love doesn’t end with death triggered Julie’s latent psychic abilities, leading her to a life full of discovery and new friendships. In The Ghost Photographer, she describes encountering and dealing with spirits both benign and malevolent, how to spiritually cleanse a house, the power of crystals, and her ability to photograph ghosts. Some of her vast collection of eerie images are included in the book. Rieger isn’t shy about narrating the stresses and traumas of her life, but equally she affirms the positive aspects with a sense of humor and subtle grace.

…a must read for anyone interested in the paranormal.

The supernatural world has never had as entertaining a chronicler as Julie Rieger. The Ghost Photographer is a must read for anyone interested in the paranormal.

Leaving Before the Rains Come by Alexandra Fuller

House of Coates by Brad Zellar