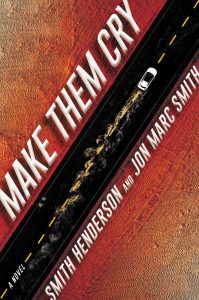 Can private military contractors hired by the United States to stabilize violence in Afghanistan by taking over the country’s heroin traffic use the same tactics with Mexican drug cartels?  “Make Them Cry,” a chilling murderous thriller by Smith Henderson and Jon Marc Smith, depicts a brutal scenario as that strategy is applied in Mexico.

Protagonists Ian Carver, a CIA agent who has gone rouge, and rebellious Diane Harbaugh, a DEA agent, collide in Tampico, Mexico, with the same objective: Capture cartel member, Gustavo El Capataz, a top “dude, higher than even a plaza boss,” who built stash houses with safe rooms and secret passages.” He has gone into hiding and the cartel wants him alive because only Gustavo knows the location of a drug tunnel between Mexico and the United States, a valuable trafficking asset. He fears the “narcos” will kill him once they have the tunnel location.

Gustavo remembers Harbaugh from her DEA days. He contacts her and offers to become an informer in exchange for a new identity. Harbaugh is in the outs with her bosses and wants to redeem herself so she agrees to meet Gustavo in Mexico, alone, without the required DEA approval.

… an outrageous and unbelievable novel, or is it?

Carver and former military men known as “The Concern” who thrive on applying their military skills to “bring peace” to a region, offer their services to apprehend Gustavo. Carver and his group see themselves as an “insurance” company that will keep order while allowing the “narcos” to continue selling drugs. The Mexican “narcos” meanwhile don’t trust Carver’s group so they order a tough Zeta gang member to locate Gustavo. When the three forces collide plenty of gunfire, car chases, body amputations, and torture ensues, filling the pages of this thriller.

The authors’ mix of Spanish and English dialogue between “narcos” and prison inmates lends some authenticity to the characters. But otherwise read this at your own risk: Enjoy, or prepare for an outrageous and unbelievable novel, or is it?

The Bradbury Chronicles by Sam Weller

The Whispering City by Sara Moliner