Review: At the End of the Matinee by Kelichiro Hirano 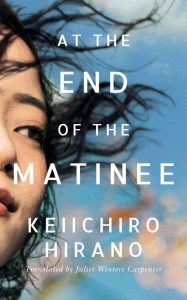 At the End of the Matinee

“At the End of the Matinee,” Japanese author Keiichiro Hirano’s new novel, depicts a torturous and suspenseful journey of two people in love whose lives bisect at the exact moment they are prepared to unite. It’s like two trains passing, each going in opposite directions.

Yoko Komine was nine years old when she first heard Satoshi Makino’s classical guitar performance. When they meet for the first time, both were in their 40s. Makino invites her to dinner after a Tokyo concert, where they instantly became emotionally and intellectually love-struck. Between the years of 2000 and 2010, they attempt to consummate their love but instead are driven apart, by misunderstandings or manipulation of others who oppose their relationship.

An award-winning book, for sure.

The story develops with the backdrop of historical events. Komine is working as journalist in Iraq where she escapes death when a bomb explodes in a Baghdad Hotel where she is working. She re-lives the incident, succumbing to PTSD, forcing her to leave her post and move to Paris. But she keeps her fears to herself and cuts communication with Makino — until, by chance, he schedules a performance in Paris and sends an invitation. When they meet, Makino declares his love: “Your existence has punched a hole in my life. Or rather, it’s embedded deep within me.”

They promise to meet again but each time they plan a union some event or someone intercedes to prevent the encounter. During these ten years, Makino suffers depression and in constant anguish over his less-than-stellar performances, coupled with an “overwhelming presence of the fresh young talent weighted on him.” He stops playing for two years.

Author Hirano digs deep into the human psyche, exploring different motivations. He also addresses symptoms of post traumatic stress, and the guilt of a survivors. Yoko’s mother a survived the Nagasaki atomic bomb, while Yoko survived the hotel explosion. Yoko’s father, a Croatian, produces movies about the Yugoslav wars.

Through complex characters, the author explores philosophical questions, like how events alter life decisions. Was it fate or chance? His book is imbued with dramatic twists and turns, some caused by events, while others are self-indulgent actions, human interventions, and self-reflections. Hirano also delivers a wealth of information on classic guitarists and their music. An award-winning book, for sure.

Kisses and Lies by Lauren Henderson

Ask a Mexican! by Gustavo Arellano