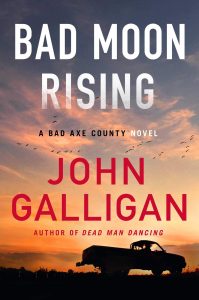 Bad Axe County Sheriff Heidi Kick’s problems rise, along with the temperatures in her corner of Wisconsin, when the murdered body of a young homeless man is found by the road.  Heidi has to deal with the case while coping with serious family matters and enduring a vicious reelection campaign.

Local newspaper editor Leroy “Grape” Fanta has his own issues. The trailer trash turned wealthy Rickreiner family bought out the county Broadcaster and turned it into a shoppers’ weekly. Vietnam veteran Grape isn’t going down without a fight. There’s one last unsolved mystery to tackle: Who has written decades of deranged letters to the Broadcaster’s opinion column? Who is the recluse from “Hell’s Hollow?”

Heidi gets word that several homeless men have gone missing over the years. There seems to be a connection to the local Amish community, in particular a reclusive family. When she checks it out, Heidi finds another murder and a troubled young woman who subsequently disappears. While trying to learn more, Heidi discovers her old acquaintance Grape Fanta is also missing. A mysterious contact offers help, and Heidi accepts. She learns just what kind of evil lies in the sweltering heat of America’s heartlands. When it reaches out to touch Heidi’s family, she must risk life and limb to save all she holds dear—or die trying.

In Bad Moon Rising Galligan shows a masterly understanding of human nature and the troubled world we live in. Heidi Kick is a fully formed character that earns sympathy and respect. The heartland setting and the rising tension, shot through with a sparky sense of humor, makes for a truly terrific read.

The Capture by Tom Isbell

The Book of Aron by Jim Shepard

Running From The Devil by Jamie Freveletti