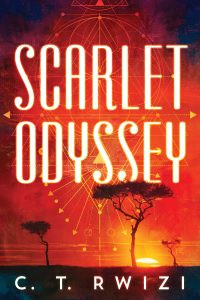 This ambitious debut novel, Scarlet Odyssey by C.T. Rwizi, features mystics, sorcerers and warriors who all fight to control plains and rivers in a magical world. Rwizi says he based his unique science fiction and worldly tale on myths and stories he heard growing up in Swaziland.

It’s a coming-of-age story that centers around Salo, a male mystic, when only women could be mystics. How he became a mystic, and the mysterious death of his mother who was the village’s mystic, is a secret Salo must discover. The tale begins with a clan invading Salo’s village which seems vulnerable since there appears to be no traditional female mystic. This forces Salo to confess that he holds the axiom of power, and, now to prove himself, he must battle the redhawk.

Because Rwizi combines technology, science fiction and myth, the novel is like a video game filled with action and tension. The redhawk, for example, is a machine,  a “metaphysical being,” a species of “astrobird … one of those inexplicable creatures with plumage that can burn so fiercely they can propel themselves in and out of the world atmosphere.”

Salo defeats the redhawk, but then the Queen orders him to complete a pilgrimage, an awakening, to the “Bloodway,” in the Kingdom of the Yontai, where he will gain knowledge and be accepted as a true mystic. His mother, who earlier made the journey “returned with designs for an alchemical reactor,” the Queen says.

The novel, the first in a planned series, includes most atypical characters, like the Enchantress who controls people’s minds, and a young woman who becomes king when her family is murdered. Salo witnesses mass murders by ruthless lords and must fight off those who attempt to usurp his power.

Rwizi delivers a fast-paced story with vivid images of sub-Saharan Africa, lacing Salo’s epic journey with flash, violence and drama, and a love story. If you are willing to suspend reality, and keep track of multiple characters, this might be a unique gem of a read. Otherwise, it might simply be too overwhelming.

Song of the Bones by M. K. Preston