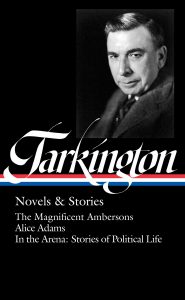 Few have won the Pulitzer Prize for Fiction twice, but Booth Tarkington did, first with his 1919 novel, “The Magnificent Ambersons,” and then, three years later, for “Alice Adams.” The Library of America marked Tarkington’s 150th birthday anniversary with a volume, edited by Tomas Mallon, containing both novels along with a selection of political stories from his career as an Indiana legislator.

Tarkington skillfully details observations on how America’s economic growth influenced social and class structure after the civil war, during the gilded age, and then, the emergence of the middle class with the rise of manufacturing, particularly the automobile.

In “The Magnificent Ambersons,” protagonist George Minafer is the pampered grandson of the wealthy Ambersons family which amassed a fortune in 1873. Minafer’s arrogance prompts Midland townspeople to longingly hope “to live to see the day when that boy would get his comeuppance!” And he does, when he refuses to accept change, especially the automobile. He abhors mansions and estates converted into apartments and small homes for the middle class moving in to work in manufacturing, referring to them as “riffraff.” Minafer’s world collapses when he realizes his family fortune was lost. Most tragic is how he inflicted his own false self-imposed importance onto his mother, left unable to enjoy true happiness before her death.

. . . a valuable historical narrative on changing social and economic structures . . .

Tarkington’s masterful development of characters and use of dialogue brings to life emotional upheaval few can accomplish. In his second novel, “Alice Adams,” the story evolves around Alice, bright, witty, and beautiful, a perfect wife for any gentleman but her parents lack wealth for her to attract a suitable suitor. Her mother nags her father, who discovered for the formula for making glue, saying if he would open up a manufacturing company, they could become “multimillionaires,” allowing Alice into acceptable high society. But there’s a question of who owns the formula, and when Alice’s new beau decides against marriage, the father succumbs to the pressure. It’s a sad tale, as Alice comes to terms with the limited opportunities open for women.

Tarkington weaves a valuable historical narrative on changing social and economic structures still relevant today, when the USA depends on migrant workers but yet considers them unsuitable to live here. Tarkington, a prolific writer, was also recognized as a playwright.

The Last Nude by Ellis Avery

No One Knows by J. T Ellison