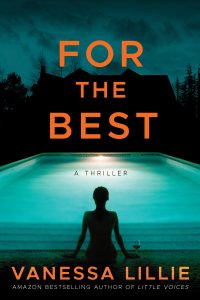 Juliet Worthington-Smith, CEO of the Poe Foundation of Rhode Island, wakes with a blistering hangover one summer morning to find the police at her door. To Juliet’s horror Dr. Terrance Castle has been murdered—and she’s in the frame for the deed. Castle received a million dollar grant from the Foundation at a gala for his ground-breaking work on restorative justice, something Juliet planned to give the organization exposure beyond Rhode Island. From the get-go the knives are out for Juliet. Suspension from her job swiftly follows Castle’s murder, with his widow Dez and the Foundation board chairman leading the accusations against her. Juliet launches a vlog to cover her own investigation to clear her name.

Juliet’s memory of the night after the grant gala is hazy. Her purse was found with Castle’s body in an alley behind the bar where she got her hangover, but how did it get there? As she investigates, Juliet uncovers damaging secrets both Terrance and Dez Castle kept hidden. Juliet encounters fierce push-back from all sides, but she’s determined to press on, helped by a reporter, an ex-boyfriend, and hindered by her controversial father, Louis. The police are hovering, and the pressure on herself and her family increases as Juliet gets closer to the truth—but it might not be the truth she expects or wants to find.

In For the Best, Lillie shows her consummate expertise at weaving story strands into a deep and complex tale where not everything can be taken at face value. A genuine thriller with a vicious twist at the end that will make the reader gasp.

The Deeds of My Fathers by Paul David Pope