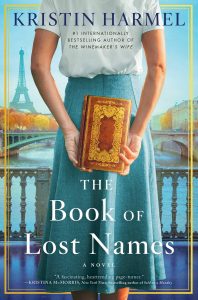 The Book of Lost Names

Eva Traube Abrams, a university student living in  Paris, refuses to believe a warning from a fellow student, who, like herself, wears a yellow star.  “A massive roundup, before Friday,” he tells her. The Germans, he says, plan to arrest “twenty-thousand foreign-born Jews.”  Eva finds this incredulous and questions what would they do with all of them.

Author Kristin Harmel’s historical fiction on World War II, “The Book of Lost Names,” is a poignant story based on true stories by forgers who helped thousands of Jewish children escape from France to Switzerland in1942 with false documents.

In one heart-rendering scene, the fictional character, Eva, observes from a neighbor’s apartment window her father being led away by German soldiers. She knows she must now escape and take her mother. With previous arrangements made by her father, Eva and her mother reach Aurignon, France, a free zone where a local Catholic priest is helping the Resistance. He  encourages Eva to use her talents to help forge documents for children secreted away in various homes throughout the village.

Eva is bothered her work will “erase” the children’s identities which is the Nazis’ aim: To eliminate the Jewish population. She agrees to continue if she can record their original names which could be very dangerous and put the children at risk. Rémy, a chemist, who has been forging documents before Eva arrives, comes up with an idea: Use the Fibonacci sequence to code the children’s names in a religious tome that would remain hidden in the church library.

. . . tension-filled novel reminds us not to forget history.

Harmel begins her story with Eva, 86, now a librarian and living in the United States. Eva reads an article about the Germans attempting to return books looted by the Nazis. She recognizes her book of children’s names. She travels to Europe to reclaim her book and reminisces about her life during the war, her love for Rémy, her work with the Resistance — and those who betrayed her.

This tension-filled novel reminds us not to forget history. It’s about those who struggled with difficult decisions when it all seemed hopeless. Ultimately, it’s about love and betrayal.

The Butterfly House by Marcia Preston