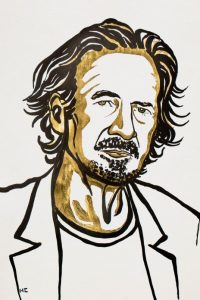 October 10, 2019–The Nobel Prize in Literature 2019 has been awarded to Austrian writer and film director Peter Handke “for an influential work that with linguistic ingenuity has explored the periphery and the specificity of human experience.”

Peter Handke was born 1942 in a village named Griffen, located in the region Kärnten in southern Austria. This was also the birthplace of his mother Maria, who belonged to the Slovenian minority. His father was a German soldier that he would not meet before reaching adulthood himself. Instead, he and his siblings grew up with his mother and her new husband, Bruno Handke. After a period in severely war-damaged Berlin the family returned and settled down in Griffen. After finishing village school he was admitted to a Christian high school in the city of Klagenfurt. From 1961 he studied law at the University of Graz but broke off his studies a few years later when his debut novel Die Hornissen (1966) was published. It is an experimental ”double fiction” in which the main character is recollecting fragments of another, for the reader unknown, novel. Together with the play Publikumsbeschimpfung (Offending the Audience, 1969) – which was staged the same year and whose main concept is to have the actors insulting the audience simply for attending – he certainly set his mark on the literary scene. This mark hardly diminished after his description of contemporary German literature as suffering from ”Beschreibungsimpotence” (description impotence) at the meeting of Gruppe 47 held in Princeton, USA. He made sure to distance himself from prevailing demands on community-oriented and political positions and instead found much of his own literary inspiration within the New Novel-movement in French literature (le Nouveau Roman).

More than fifty years later, having produced a great numbers of works in different genres, he has established himself as one of the most influential writers in Europe after the Second World War. His bibliography contains novels, essays, note books, dramatic works and screenplays. Since 1990 he has been based in Chaville, southwest of Paris, and from here he has made many productive journeys. His works are filled with a strong desire to discover and to make his discoveries come to life by finding new literary expressions for them. As he has claimed: ”To be receptive is everything”. With this as his objective he manages to charge even the smallest of details in every day experience with explosive significance. His work is thus characterised by a strong adventurous spirit, but also by a nostalgic inclination, first visible in the beginning of the 1980s, in the drama Über die Dörfer 1981 (Walk about the Villages, 2015) and particularly in the novel Die Wiederholung,1986 (Repetition, 1988), where the protagonist Georg Kobal returns to Handke’s Slovenic origins on the maternal side.

Motivating this return to the origins is the need to remember and restitute the dead. But by the term ”Wiederholung” one should not understand strict repetition. In the novel Die Wiederholung memory is transformed in the writing act. Likewise, in the dreamplay Immer noch Sturm, 2010 (Storm Still, 2014), also taking place in Slovenia, the idealised brother of Handke’s mother, Gregor, who was killed in the war, is resurrected as a partisan opposing the Nazi occupation of Austria. In Handke, the past must be continuously rewritten but cannot as in Proust be recovered in a pure act of remembrance.

In effect, Handke’s writing takes its departure in catastrophe, as he reports in Das Gewicht der Welt, 1977, (The Weight of the World, 1984), the work that introduces the vast production of daily notes during the years. This experience is memorably depicted in the short and harsh, but deeply affectionate book written after his mother’s suicide Wunschloses Unglück, 1972 (A Sorrow Beyond Dreams: a life story, 1975). Handke would probably subscribe to Maurice Maeterlinck’s words: ”We are never more intimately at one with ourselves than after an irreparable catastrophe. Then we seem to have found ourselves again and recovered an unknown and essential part of our being. A strange stillness presents itself.” These moments can be recognised in several of Handke’s works, and they are not seldom combined with the epiphanic presence of the world, notably in Die Stunde der wahren Empfindung, 1975, (A Moment of True Feeling, 1977).

The peculiar art of Handke is the extraordinary attention to landscapes and the material presence of the world, which has made cinema and painting two of his greatest sources of inspiration. At the same time his writing shows an unending quest for existential meaning. Therefore, wandering and migration is his primary mode of activity, and the road is the place for what he has called his ”epic step”. We can see this in his first major attempt to describe a landscape, Langsame Heimkehr 1979 (Slow Homecoming, 1985), often viewed as a turning point in his writing. The ”epic step” is however not bound to genre, but is also visible in the dramatic work, as is recently demonstrated in Die Unschuldigen, ich und die Unbekannte am Rand der Landstrasse. Ein Schauspiel in vier Jahreszeiten (2015).

Often Handke points at the medieval writer Wolfram von Eschenbach and the Quest Romance as a model of narrative, where an erring solitary hero in search of the Holy Grail is put to the test. This is wonderfully displayed in the recent, great novel Die Obstdiebin oder Einfache Fahrt ins Landesinnere (2017), where the young heroine, Alexia, is erring in the interior of the long French province Picardie not knowing what strange fortune she is expecting. In another of his novels, Der Chinese des Schmerzes, 1983 (Across, 1986) the protagonist Andreas Loser commits a murderous, quite unpremeditated act that dramatically changes his life span. The description of the outskirts of the city of Salzburg is marvellously rich and precise, while the intrigue is rigorously reduced, almost nonexistent.

Handke has said that ”the classics have saved me”, and not least the legacy of Goethe is everywhere present, testifying to Handke’s will to return to the senses and the living experience of man. One cannot least observe this in his notebooks, in the recent Vor der Baumschattenwand nachts: Zeichen und Anflüge von der Peripherie 2007-2015 (2016). The importance of the classics is also evident in his translations from ancient Greek, works by Aeschylus, Euripides, Sophocles. He has also made a long series of translations from French and English, works by Emanuel Bove, René Char, Marguerite Duras, Julien Green, Patrick Modiano, Francis Ponge and Shakespeare.

At the same time Handke remains acutely contemporary and one aspect of this is his relation to Franz Kafka. In the same vein Handke must revolt against his paternal heritage, that in his case was perverted by the Nazi regime. Handke chose the maternal, Slovenic line of heritage, a significant reason for his antinationalistic myth of his Balkan origins. Although he has, at times, caused controversy he cannot be considered an engaged writer in the sense of Sartre, and he gives us no political programs.

Handke has chosen exile as a productive life path, where the experience of passing thresholds and geographic borders recurs. If he can be described as the writer of place it is not primarily the metropoles but the suburbs and the landscape that attract his attention. He recaptures the unseen and makes us part of it. This happens in particular in some of his most powerful narratives, Mein Jahr in der Niemandsbucht. Ein Märchen aus den neuen Zeiten from 1994 (My Year in the No-Man’s Bay, 1998) or the above mentioned Die Obstdiebin, both reversing the tradition from Baudelaire onwards that made Paris the mythic centre of modern literature. Together with the young heroine Alexia we are here on foot moving away from the proclaimed centre into the French region of Picardie, and the names of the small villages are suddenly filled with intoxicating beauty. Handke subverts our ideas of the centrally governed state, and makes us realize that the centre is everywhere.

Watch the live stream of the announcements here.