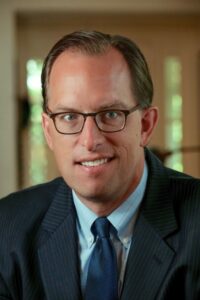 The author of several books focusing on the U.S. Navy, Hornfischer recently had been honored with the Navy Distinguished Public Service Award for four books: The Last Stand of the Tin Can Sailors: The Extraordinary World War II Story of the U.S. Navy’s Finest Hour;

Ship of Ghosts: The Story of the USS Houston, FDR’s Legendary Lost Cruiser, and the Epic Saga of Her Survivors; Neptune’s Inferno: The U.S. Navy at Guadalcanal; and The Fleet at Flood Tide: America at Total War in the Pacific, 1944-1945.

According to his official obituary, “Jim took great pride in the fact that each of his books has been placed on the Chief of Naval Operations’ Required Reading List.”

A graduate of Colgate University, Hornfischer also earned two degrees at the University of Texas at Austin: an MBA from the McCombs School of Business and a Juris Doctor degree from UT’s School of Law. Soon after law school, he and his wife Sharon opened Hornfischer Literary Management, one of Austin’s first literary agencies.

Three additional Hornfischer books will be published posthumously: Destroyer Captain: The Last Stand of Ernest Evans, written with his son David J. Hornfischer; Who Can Hold the Sea: The US Navy in the Cold War, 1945-1960, and The Last Stand of the Tin Can Sailors: A Graphic Novel Adaptation.

His family has requested that donations in his memory be made to the National Museum of the Pacific War in Fredericksburg, where his archives are housed.