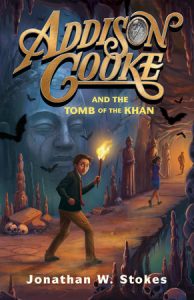 Author and screenwriter Jonathan W. Stokes will visit the Dallas area on Wednesday, November 14 for a launch of the second book in his Goonies-style adventure series for middle grade readers, Addison Cooke and the Tomb of the Khan. Last fall Stokes burst on the children’s book scene with Addison Cooke, a smooth-talking, refined twelve-year-old who loves a grand adventure.

The first book, Addison Cooke and the Treasure of the Incas, was an instant favorite as reviewers raved about the “throwback charm” (Common Sense Media) calling it “an exciting Indiana Jones-style tale” (Good Housekeeping), and waiting eagerly for Addison’s next adventure.

That wait is no longer. Addison Cooke is back in his latest laugh-out-loud adventure in ADDISON COOKE AND THE TOMB OF THE KHAN (Philomel; on sale November 14, 2017; grades 3-7). Complete with a cast of funny, kid-friendly characters reminiscent of The Goonies, and a quest to discover ancient secrets, Addison Cooke strikes gold once again in his second adventure: this time a journey through Asia in pursuit of the legendary tomb of Genghis Khan.

Author Jonathon W. Stokes is a writer and director who has written screenplays for Fox, Paramount, Warner Brothers, and Sony/Columbia, and for actors such as Will Smith, Jeremy Renner, and Hugh Jackman. Jonathan’s last four screenplays were all recognized on The Black List, an annual survey of Hollywood executives’ favorite screenplays.

Jonathan will present at three local Dallas schools and is available for interview. Thank you for letting me know if you are interested in speaking with him or if you would like to receive review copies of the Addison Cooke series.