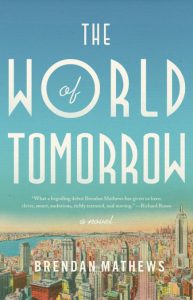 The World of Tomorrow, Brendan Mathews, Little Brown and Company – Francis and Michael Dempsey join their older brother, Martin, in America in June of 1939. Martin is a struggling jazz musician, Francis is passing himself off as Sir Angus, and Michael was deafened and addled by an explosion before the pair fled Ireland. Into this mix come Lilly, an immigrant from Prague, threatened with a return to her Nazi-occupied country, Cronin, an IRA hit man, Anisette, a rich American heiress sweet on “Sir Angus,” the King and Queen of England, the World’s Fair and the ghost of W.B. Yeats.

AUTHORLINK:    What was your first thought about this story?

MATHEWS:  The novel began with a few handwritten pages in the summer in 2009. I started with a character loosely based on my grandfather, who emigrated from Ireland to New York City in 1929 with dreams of being an arranger for a big band. I imagined a young man in a new car flushed with his first taste of success, on his way to see the woman he loved—and then in the last paragraph, I put the same man in the same car on the same road, only it was a few months later and his life was coming apart. None of those pages made it into the final draft, but all along I was chasing that same energy and trying to fill in the blank: what had taken this moment of triumph and turned it into something tragic?

AUTHORLINK: What interested you about setting it in this time and place?

I set the book in June, between these moments of optimism and catastrophe.

MATHEWS:  It’s no stretch to say that after 1939, the world would never be the same. In April, the World’s Fair opened, and in September, the Second World War would begin. The World’s Fair put on display a particularly American view of the brighter, better world that was supposed to be just around the corner—and then the war showed the terrible cost that would have to be paid before anyone could reach that future. So I set the book in June, between these moments of optimism and catastrophe. Many of the characters in the book find themselves in a similar spot: hoping their lives are about to improve, but dreading that the worst is about to happen.

And I couldn’t think of a better place to explore the contradictions of those times than in New York—a city that makes a lot of promises that it doesn’t always keep.

AUTHORLINK: How did you put together the pieces of each of the characters and their separate stories? Take Lilly, for instance, did you first know how she would impact the Dempseys and then go back and fill in her story to get her there? Or what?

I didn’t know if anyone was ever going to read the book—and that gave me the freedom to do whatever I wanted.

MATHEWS:  For the first few years, I wrote the book in fragments in no particular order. When I settled on the idea of the book transpiring over one week, I started fitting the scenes into a calendar, trying to see the gaps. For Lilly, I started with the scene where she meets Michael, the youngest Dempsey brother, which occurs about midway through the novel. When I wrote it, I didn’t really know who she was or what role she would play in the life of Dempsey brothers. I just trusted that if I kept writing, I would figure it out.

AUTHORLINK: How did you happen to add the supernatural element of Michael conversing with Yeats? We might think it was all in Michael’s head, except Yeats does get a message to Lilly.

MATHEWS:  I didn’t know if anyone was ever going to read the book—and that gave me the freedom to do whatever I wanted. So if Michael couldn’t hear or speak as the result of an accident, I could give him the ghost of W.B. Yeats as a companion. They make a feisty pair: an erudite, snobbish, spiritualist poet stuck with a naïve, small-town, Catholic seminary dropout. And then the book is so full of people haunted by the past—by their sins and secrets—that I thought it could sustain at least one actual haunting.

Though Michael wonders if Yeats is real or not, I think it would have been too easy to explain him away as a hallucination. The more time I spent with Yeats in the book, the more comfortable I became with him as another character fearful that his life (or afterlife) was taking a turn for the worse.

AUTHORLINK: Agents’ and others’ ideas of how stories should be written change – on flashbacks or back story and amount of narrative, for examples. Did anyone suggest that using ping-pong points of view (bouncing from one person to another) in some scenes could have been a problem? (One example is in the scene with the doctor and the typewriter).

MATHEWS:  I’ve always loved the free indirect style—letting characters’ thoughts seize control of third-person narration—and I knew that I wanted to give voice to multiple points of view in the novel. Most of those shifts take place chapter-to-chapter, but scenes of tension or high anxiety called for more rapid-fire shifts. My editor and I talked about the readers’ experience in these moments and in plenty of other spots in the book, and we both felt that as long as the voices were distinctive—as long as you knew where these thoughts were coming from—then we could trust the reader to follow the action, and even to enjoy the hurly-burly of those scenes.

AUTHORLINK: Was there also any concern about how many characters you were featuring in their own scenes?

MATHEWS:  I knew from the beginning that this wasn’t going to be a book with a single protagonist, or with one main plot that pushed everything else into subplot status. I really wanted to focus on the connections between the characters—the ways they’re bound by love, guilt, obligation—and explore how they responded to our rejected those claims.

A lot of the action takes place around the big band jazz world, and I came to think about the book like a Count Basie song. Basie always let his musicians have their say: each stepped out for a solo, one after the other, and then stepped back into the band, but the song kept swinging. That said, we did cut some solos along the way. I distinctly remember my editor, Ben George, asking me how much we really needed to know about the landlady’s wayward son (answer: nothing).

AUTHORLINK: Were you at all dissuaded from trying to sell a debut novel of over 500 pages?

I think a debut novel is always asking its readers for a leap of faith . . .

MATHEWS:  When I sold the novel, it was only 150 pages long—it was a partial manuscript in a two-book deal that included a short-story collection. I thought at the time that the final draft would be about 400 to 450 pages. The draft I delivered was more than 600, and even I realized that I was pushing my luck. I think a debut novel is always asking its readers for a leap of faith (here’s a book by someone you’ve never heard of!) but I hoped to find an audience hungry for a big novel about love and obligation and the ways in which we’re haunted by our past—especially one packed with jazz musicians, imposters, gangsters, socialites, artists, and ghosts.

AUTHORLINK: Your tying up of where their lives went up to 40 years into the future was another unusual trait. How did you decide to do that?

MATHEWS:  As I got closer to the end, I really found myself grappling with the one-week structure of the book. I kept asking, how much can a life change in a week? Any novel draws an artificial boundary around the story of a life, and I wanted to push beyond the boundary I’d set for myself in that week. I wanted to recognize that these stories—these lives—had a long way to go, and that there were plenty of joys and tragedies, both momentous and mundane, lurking in the future.

MATHEWS:  I have a collection of stories called THIS IS NOT A LOVE SONG coming out in early 2019. And while I’m revising those stories, I’m finding my way into a very different Novel #2.

Brendan Mathews’ fiction has been in The Best American Short Stories twice and in Cincinnati Review and many other publications in the US and UK. He was a Fulbright Scholar to Ireland, and received multiple grants and fellowships including to the University of Virginia, where he received his MFA. He teaches at Bard College at Simon’s Rock.