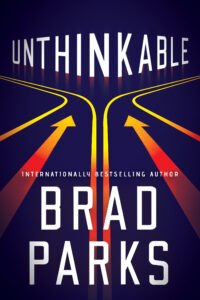 Bestselling author Brad Parks is a pro at taking unusual, even “out there” premises, then populating them with relatable characters and grounding them in such realistic detail you almost believe the story could really happen. His novel, UNTHINKABLE, which Thomas & Mercer published on July 27, 2021, is about an ordinary guy who is faced with an untenable choice: he’s told that if he doesn’t take a particular action (that would destroy his family), a billion people in the future will die.

Nate Lovejoy is a full-time “stay-at-home” dad, who’s chosen to take on the care of his two young children while his wife climbs the corporate ladder at her high-powered law firm. In a genre populated by slick and hardened FBI agents and secret operatives, his character might be a surprise, but he’s grounded in Parks’ experience as the primary caretaker of his own two toddlers.

Brad talks to Authorlink about the intricacies of creating a story where the stakes for the characters are incredibly high and why he writes in short chapters and changes voice from first-person to the omniscient viewpoint. He also praises his editors and agent who helped him succeed as an internationally bestselling author.

“I listen to my characters,” Brad says.

In UNTHINKABLE, Nate Lovejoy is utterly baffled when members of a powerful secret society abduct him at the behest of their leader, Vanslow DeGange, who claims to know the future—and has proof. But Nate maintains it’s a hoax, especially because he’s told that what sets the mass casualty incident in motion is a lawsuit against the biggest power company in Virginia, which is being championed by his wife. But as evidence of DeGange’s ability to see the future piles up, Nate begins to feel the full weight of the mission with which he’s been tasked and the role that he’s forced to play.

With a dad who is tasked with saving the world—and has the kids in tow—expect a wild ride!

Brad Parks is the only writer to have won the Shamus, Nero, and Lefty Awards, three of American crime fiction’s most prestigious prizes. His novels have been published in fifteen languages. A graduate of Dartmouth College,  Parks is a former journalist with the Washington Post and the Star-Ledger (Newark, w Jersey). He is now a full-time novelist living in Virginia with his wife and two school-age children.

Find all our coverage of thriller writers by typing the word thriller into the search box of any page.

Get your manuscript in front of interested agents and publishers. List your query on Authorlink® Rights for Sale/Publishers Market.