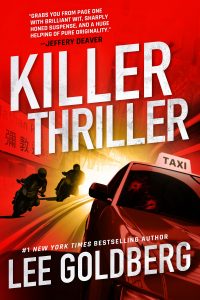 Ian Ludlow, best-selling author of the Clint Straker thriller series, got an offer from the CIA. The agency is impressed by Ludlow’s talent for devising plots which have an unnerving habit of coming true, and wants to hire him to predict trouble for the United States, but Ludlow declines. After his previous experience he’s had enough of real-life thrillers. His friend Margo French, lesbian singer-songwriter and former dog walker, seems unimpressed, too.

Months later, Ludlow is more concerned with the new movie adaptation of his latest novel. It means an all expenses paid jaunt to Hong Kong, although as usual Hollywood has butchered his work. When Margo shows up out of the blue, homeless and jobless, he takes her on board as a researcher. Their arrival in Hong Kong triggers a cascade of events when Chinese intelligence mistakes Ludlow for a crack secret agent. Margo’s unexpected skills, a defecting Chinese actress, and dramatic chases through the streets of Hong Kong lead to a showdown like no other. If Ludlow doesn’t succeed in foiling the Chinese plot by creating one of his own, the president of the United States will have more than his VP’s flatulence to worry about…

Intrigue, dry humor, fast-paced action and an “it could really happen” plot sets Killer Thriller up among the best of the spy caper novels. Ludlow and Margo are great characters you’ll cheer for all the way to the last page and beyond.

After the Dance by Edwidge Danticat