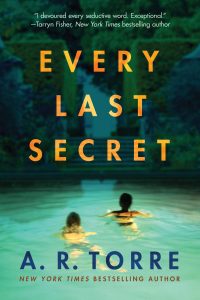 Torre, who initially self-published her way to the New York Times bestseller list as a romance writer, talks to Authorlink® about her decision to write a thriller, how she works, and the challenges Hollywood poses as three of her works have been released or optioned as movies.

Her latest book, EVERY LAST SECRET, presents a rousing battle of wits and schemes between two Silicon Valley wives over one of their husbands and addresses complex and thorny questions about marriage, fidelity and domestic security. Torre was inspired to write the book after a close friend discovered that her husband was having an affair, and the woman he was seeing turned out to be mentally unstable. Heartbroken for her friend and horrified by the ordeal, the bestselling author began to speculate: How far might a woman go to preserve her marriage and its trappings—especially when social status and major financial assets are at stake—when the relationship is threatened by infidelity?  And so EVERY LAST SECRET came to be.  Told in the alternating perspectives of both wife and mistress, the novel examines what two women perceive to be the perfect life—and the cost of keeping it intact.

Alessandra has written 22 novels, including three New York Times bestsellers.  She has been featured in such publications as Elle and Elle UK, has guest-blogged for the Huffington Post and was the Bedroom Blogger for Cosmopolitan.com. In 2017, her bestseller Hollywood Dirt was released as a full-length feature film by PassionFlix, and she has two other film projects under option. Her work has been translated in seventeen languages and are distributed in more than thirty countries.

She is also the CEO of Authors A.I., a tech start-up to help authors improve their novels.  She lives in Key West, Florida.  Visit her at www.alssandratorre.com or on Twitter, Facebook, BookBub and Goodreads.

Hollywood Cartoonist and Screenwriter Jack Enyart Talks About His Career