Review: The Mostly True Story of Tanner and Louise 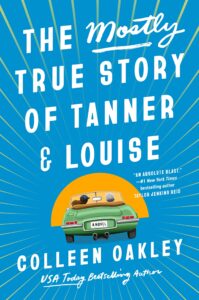 The Mostly True Story of Tanner and Louise

“The Mostly True Story of Tanner & Louise” is mind-bending mystery, featuring two winsome generational characters on the lam in a mint-green Jaguar XKE. Author Colleen Oakley spins a tale of a dramatic manhunt for two women who’d only met a week earlier before they went on the run.

… a generational drama impossible to put down.

When Louise Wilt, 84, falls and hurts her hip, her daughter determines she needs a full-time caretaker, though Wilt is quite capable of taking care of herself. The job is filled by 21-year-old Tanner Quimby, a promising college soccer player who was injured and lost her scholarship. Her parents have also booted her out because she spends hours playing video games.

The story unfolds as a narrative written from the pair’s own perspectives. From Wilt’s view, we learn she has received an ominous message from her friend George whom she has not heard from for over 40 years. Coincidently, Tanner sees a TV news story about the FBI reopening a cold case. In 1975, jewels and money were stolen from a Boston luxury hotel. No one was arrested, but now the FBI has a suspect: A photograph on the screen altered with age-progression software looks just like Wilt.

That same night, Wilt crashes into Tanner’s bedroom and demands Tanner drive her West. “The plan is you are going to drive me to California,” she says. It wasn’t Wilt’s $10,000 offer that prompted Tanner to agree to drive her, but rather her reluctance to return to her parents’ home.

As Tanner drives, she tells herself it’s an “absurd idea Mrs. Wilt could be a … criminal mastermind,” especially since Wilt remains calm playing her crossword puzzles while Tanner drove. Their journey encounters thrilling and humorous obstacles and they begin to develop a bond, but Wilt never discloses her reason behind the urgency to reach California.

Wilt teaches Tanner how to use a gun and advises her that sometimes it is necessary to break rules. Always have a frozen leg of lamb in the freezer, she tells her, because you never know when you need to defend yourself. And in one embarrassing moment for Tanner, Wilt invites a man at the hotel where they were staying to join her for sex that evening. Old people still have an “itch,” she tells Tanner.

Their circumstances become increasingly dangerous as authorities close in, forcing them to abandon the Jaguar. Wilt decides to go solo to California one way or another. But Tanner refuses to abandon Wilt. The drama around the final stretch before they reach California is priceless.

Author Colleen Oakley, who told an interviewer she wanted to show there’s was a lot to learn from older people, has succeeded in skillfully writing a generational drama impossible to put down.

A Mountain of Crumbs by Elena Gorokhova

The Keeper of Lost Causes by Jussi Adler-Olsen