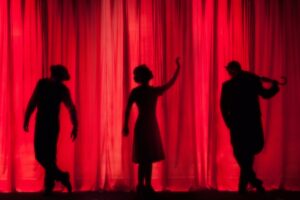 Knowing how to set up a story, build to a climax, create reversals that surprise your readers, and tie up loose ends will make the difference between a powerful narrative and a meandering anecdote. There are many different story structures that have been established for achieving particular ends, and the Five Act Structure is one of the oldest and most commonly cited. However, it’s also one of the most misunderstood.In this article, we’ll explain how it’s misunderstood, and look at how it can be used for its original purpose.

The formalization of the Five Act Structure is largely credited to Gustav Freytag, a German playwright, and novelist from the 19th century.

In his work Die Technik des Dramas (1886), Freytag described his study of a range of classical Greek and Shakespearean plays and identified the common patterns and structures effective in impacting audiences.

The thing a lot of people don’t realize is Freytag was pretty obsessed with a specific type of story structure — the tragedy.

So if you want to write a classic tragedy or have your story follow that sort of arc, the Five Act Structure, and Freytag’s Pyramid in particular, will be extremely useful.

However, if you’re looking to write a story better suited to the needs of most modern audiences, with a protagonist who grows and overcomes the odds and triumphs at the end, the Five Act Story structure may not be the best fit.

Quite a few people have tried to adjust the Five Act story structure so it better fits modern stories, but we’d argue that rather than trying to ‘fix’ the structure so it aligns better with contemporary expectations, you’d be better off keeping it as a different shaped tool for a different job.

If you want a plot structure that can be found commonly in bestselling books and blockbuster movies, check out the Hero’s Journey and the Three Act Structure.

But if you’d like to learn about a tool that creates a different shaped story, read on.

As mentioned above, many modern interpretations of the Five Act structure have diverged quite a lot from Freytag’s propositions, but often still use the name ‘Freytag’s Pyramid’.

Here is what Freytag actually set out: 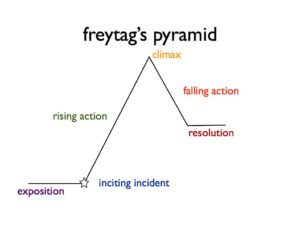 If you’d like to see the original and find out more about Freytag’s Five Parts and Three Crises, click here.

The most common way the pyramid is changed, is to add horizontal lines on the front and back.

You can see why analysts might want to do this because, in the original diagram, each ‘part’ is represented by a ‘point’ which doesn’t have a clear beginning or end. Using a line makes it clearer that it is a ‘part’ or ‘act’ rather than a single event.

The other things you can see here which are common in the misinterpretation are that the ‘rise’ and ‘fall’ have been called ‘rising action’ and ‘falling action’, whereas Freytag used the word ‘movement’ not ‘action’.

This may seem subtle, but it leads to a critically different interpretation.

‘Falling Action’ suggests that the story is winding down, which is further implied by the fact it follows the ‘climax’.

However, what Freytag meant by ‘falling movement’ was not necessarily that there was less action or excitement, only that the protagonist’s fortunes were heading in a negative direction, rather than in the first half, where their star was rising.

Also, the ‘three crises’ have been dispensed with.

Finally, a huge number of these interpretations use the word ‘denouement’ for the final act, which Freytag never used.

Some writers go even further and skew the pyramid so it is no longer symmetrical:

This has the effect of moving the climax closer to the end, which is what present-day audiences will expect.

It is sometimes adjusted by lifting the resolution so it is not on the same level as the Introduction:

This makes the pyramid fit the modern expectation that the main character will finish the story in a better position than they started.

These interpretations can be extremely useful, and if they help you in your plotting, then great.

But again, we would argue that these miss what makes the Five Act Structure unique, and therefore useful as a tool in its differentiation from other plot structures.

If you’d like your climax closer to the end, or if you want your hero to overcome the odds and end up a better person, then explore some of the many other plot outlines and templates available.

But below we will explore the Five Act Structure by sticking more closely to what Freytag originally intended.

A Breakdown of the 5 Act Story Structure

The Five Parts of the Five Act Story Structure are:

Within the Five Parts are the Three Crises:

Let’s look at each of these more closely:

The introduction is where you set the scene, and introduce the main character. It is the status quo that exists before the action takes place, although there may be hints about what is to come.

Within the first act you find what Freytag called the first crisis – ‘The Exciting Moment’. This term ‘exciting’ is used more in the scientific sense of ‘stirring up’ rather than ‘flashy’.

This corresponds to the ‘Call to Action’ or the ‘Inciting Incident’ from other plot structures. It is the point where the main character’s life is turned upside down. Something happens that makes this day unlike any other. It is often an invitation or a threat.

Now the story starts in earnest and action ramps up. More characters are introduced – some allies, some enemies. Freytag states that all characters should be introduced by the end of the second act. There will be challenges and excitement.

In Freytag’s analysis, the first two Acts consist of the main character’s fortunes going in one direction – in the case of a tragedy, the protagonist will spend the first half climbing toward their goal.

The Climax represents the reversal of the main character’s fortunes.

The main way in which the Five Act Structure differs from most other popular dramatic structures is that it places the climax in the middle of the story.

There will be a great dramatic event, ‘The Tragic Suspense’, a peak of excitement, often with the protagonist achieving their goal.

Freytag’s Climax Versus the Midpoint

There is a lot of synchronicity between what Freytag calls the Climax and what many screenwriters and novelists call the midpoint.

As implied, the midpoint happens in the middle of the story. It represents a highly dramatic moment, where the protagonist realizes they have to change.

This ‘reversal’ often refers to the character embracing the internal changes they have to undertake in order to achieve the personal growth of their character arc. There’s a great article about this here.

However, there is a major difference, in that the midpoint is not considered the most climactic part of the action, which happens later. And in most other plot structures the main character will continue to rise towards their goal throughout the second half of the story, albeit with troughs and setbacks.

As mentioned above, the second half of the story is a reflection, or mirror, of the first half.

Freytag called the first half the ‘play’ and the second half the ‘counterplay.’;

If the first half was characterized by success, the second half consists of repeated failures.

However, Freytag does admit the value of offering the audience one final glimpse of hope for dramatic effect, before snatching it away to make the catastrophe all the more devastating. He calls this ‘the Final Suspense’.

This potentially corresponds with but contrasts to, the ‘Dark Moment’ or ‘Hitting Rock Bottom’ of other plot structures, however, in those structures the action would usually still be rising, so this moment would be a brief but devastating dip, rather than a ray of light.

Freytag stresses that ‘the catastrophe must not come entirely as a surprise to the audience’.

Instead, he says it is simply a necessary consequence of what has come before – the final nail in the coffin, as it were. Any hope the audience may have that the piece will close happily are soundly disabused of that notion.

To put it another way – everyone dies.

Macbeth is one of the plays Freytag studied to come up with his theory—; and therefore works as a great example of the Five Act Structure.

The scene is set with Macbeth emerging victorious from the war. As well as Macbeth, the main characters Banquo, King Duncan, Lady Macbeth, Macduff and Malcolm are introduced. As the ‘exciting moment’ the three witches prophesied that Macbeth will be King, putting the idea into his mind.

Macbeth and Lady Macbeth plot to kill King Duncan, and succeed. They further succeed in getting away with murdering the guards who might betray them and frightening Duncan’s sons into fleeing – making them look like the guilty culprits.

Macbeth becomes King – achieving his peak of success, and the peak of the pyramid. But while assassins hired by Macbeth manage to murder Banquo, Banquo’s son Fleance escapes, in the first step to Macbeth’s unravelling.

Macbeth sees Banquo’s ghost at the celebratory feast, and his mad behaviour makes those around him begin to doubt his soundness of mind and honour.

Macbeth returns to the witches who make him believe he is invincible, even as his opponents are gathering their forces. In an attempt to strengthen his hold on the crown, Macbeth murders his opponent MacDuff’s family, only succeeding in creating another bitter enemy.

As the enemy army approaches, Lady Macbeth goes mad, alongside Macbeth who has become manic, cruel, and haughty. His men desert him.

Macbeth’s opponents lay siege to the castle and Macbeth is so far gone that when Lady Macbeth dies, all he can do is think about the meaninglessness of life. Macduff kills Macbeth and Malcolm becomes King.

As demonstrated by Shakespeare, the Five Act Structure can be a powerful way to layout a story.

The ideas of a reversal at the midpoint and an ‘exciting force’ can be found in many modern stories, even those that otherwise do not follow the Five Acts or Freytag’s Pyramid.

If you’re struggling with the structure of your novel, you may want to see how these parts and crises can help add direction and emotional impact.

You may also want to check out some alternative plot structures, including the character-driven plot structure, and the hero’s journey.

Authorlink members and visitors get a 5% discount when you order the Basic package for Novel-Writing Software. Use coupon code AUTHORLINK during sign-up.

Need a pro to assess your manuscript? See how Authorlink can help. 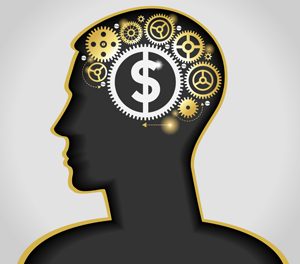 FAQs: Where do you get your story ideas? 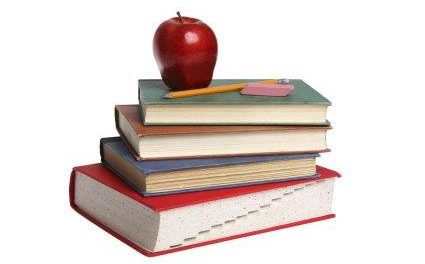 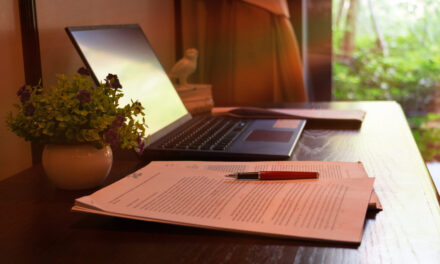