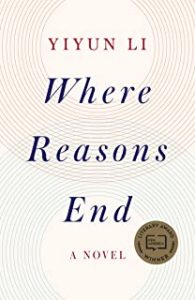 In March 2020, PEN America announced, the 2020 PEN America Literary Awards winners in a ceremony in New York City, hosted by Seth Meyers. The top prize for a full-length novel was awarded to Yiyun Li for the book, Where Reasons End,  (Random House) Hudson | IndieBound. We are just now catching up on some of the news as a result of the Covid-19 slowdown.

Ms. Li, who earned the $75,000 prize, was honored  for a book-length work of any genre for its originality, merit, and impact, and that has broken new ground by reshaping the boundaries of its form and signaling strong potential for lasting influence.

From the judges’ citation: “In this spare, haunting, deeply humane novel, Yiyun Li bends the conventions of narrative to accommodate an extremity of experience that’s often beyond representation. In these posthumous conversations between a mother and the young son she recently lost to suicide, what might have been an unremittingly desolate book instead bristles with humor and playfulness, and achieves finally a profound reconciliation. Li has written a novel unlike anything we have read before, a book that is beautiful and wise, and almost unbearably moving in its portrait of a woman turning to literature as to a last resort, and finding that it might—barely, savingly—suffice.”

Description for WHERE REASONS END

A fearless writer confronts grief and transforms it into art, in a book of surprising beauty and love, “a masterpiece by a master” (Elizabeth McCracken, Vanity Fair).

“Li has converted the messy and devastating stuff of life into a remarkable work of art.”—The Wall Street Journal

The narrator of Where Reasons End writes, “I had but one delusion, which I held on to with all my willpower: We once gave Nikolai a life of flesh and blood; and I’m doing it over again, this time by words.”

Yiyun Li meets life’s deepest sorrows as she imagines a conversation between a mother and child in a timeless world. Composed in the months after she lost a child to suicide, Where Reasons End trespasses into the space between life and death as mother and child talk, free from old images and narratives. Deeply moving, these conversations portray the love and complexity of a relationship.

Written with originality, precision, and poise, Where Reasons End is suffused with intimacy, inescapable pain, and fierce love. 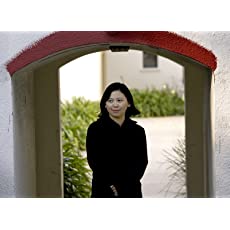 Yiyun Li is the author of six works of fiction—Must I Go, Where Reasons End, Kinder Than Solitude, A Thousand Years of Good Prayers, The Vagrants, and Gold Boy, Emerald Girl—and the memoir Dear Friend, from My Life I Write to You in Your Life. She is the recipient of many awards, including a PEN/Hemingway Award, a PEN/Jean Stein Book Award, a MacArthur Foundation fellowship, and a Windham-Campbell Prize, and was featured in The New Yorker’s 20 Under 40 fiction issue. Her work has appeared in The New Yorker, A Public Space, The Best American Short Stories, and The O. Henry Prize Stories, among other publications. She teaches at Princeton University and lives in Princeton, New Jersey.

Please note: The PEN/Hemingway Award for Debut Novel were honored and celebrated on April 5, 2020, at the John F. Kennedy Presidential Library and Museum in Boston.

HarperCollins/Morrow Cuts Back Cookbook Titles for 2007