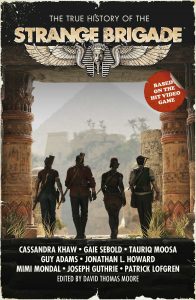 The True History Of The Strange Brigade

Anthology fiction based on the highly-anticipated up-coming video game!

A SAFARI INTO DANGER!

There are remote corners of the British Empire where the supernatural lurks and the shadows linger, where few dare go and fewer return.

A TIME FOR HEROES!

This is the world of the little-known Department of Antiquities—the so-called “Strange Brigade”—tasked with confronting ancient and terrible evils that threaten us all. But who are these mysterious adventurers?

Join rising stars Cassandra Khaw, Gaie Sebold, Tauriq Moosa, Guy Adams, Jonathan L. Howard, Mimi Mondal, Patrick Lofgrenand Joseph Guthrie as they delve into the hidden origins of some of the Brigade’s finest, and marvel at these never-before-seen tales of our fearless and unflinching heroes…