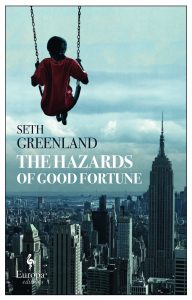 What does it mean to be a good guy in a world fraught with racial tensions and steeped in egos? In an AUDIO interview with Authorlink,  award-winning author, playwright and screenwriter Seth Greenland discusses the development of his latest novel, THE HAZARDS OF GOOD FORTUNE, and what motivated him to write the 600-page-plus work.

Greenland is the rare writer who can create deeply tragic characters and infuse their stories with a surprising blend of humor, compassion, and scathing satire. His previously published books The Bones, Shining City, I Regret Everything and The Angry Buddhist tackled thorny issues surrounding class, ambition, and entitlement in modern life and have earned wide critical acclaim and legions of fans worldwide.

In the Authorlink discussion, he calls writing a novel “the freest form of creativity,”  compared to other media.  He explains how he is able to get inside a character’s head, the importance of the first three pages of a book, and what he does when in the process of writing he hits a brick wall.

Greenland’s fifth novel–in the tradition of Charles Dickens, Theodore Dreiser, and Tom Wolfe’s The Bonfire of the Vanities–is his most ambitious accomplishment to date. Set in 2012 with President Barack Obama in office, THE HAZARDS OF GOOD FORTUNE (Europa Editions; publication date: August 21, 2018) is a witty, heartbreaking, and unflinching tale in which generations, races, and religions intersect and clash.

By setting the novel in New York City and neighboring Westchester, Greenland returns to his Jewish roots and the place of his birth with a landscape that is both deeply personal and emblematic of a sharply defined time when social attitudes were shifting rapidly. The prominent Jewish real estate families he remembered from growing up there in the 1970s were the models for the Gladstones, the family at the book’s center. The family’s head, Jay Gladstone, is heir to a massive real estate fortune and owns an NBA team, so he presides over a multi-racial workforce. He’s a man with good intentions, but in a fit of pique he utters words that are misinterpreted, and when they go viral, he finds himself accused of being a racist. Jay discovers all too late that his past good deeds aren’t going to redeem him in the eyes of the public.

Along with Jay Gladstone’s gilded universe, here are the worlds of an opportunistic district attorney who refuses to let a failing marriage interfere with her plan to run for governor, an aging professional athlete in search of one last payday, a misguided group of college radicals, a virtuous but unlucky cop, and a feisty pair of talk radio personalities who serve as a Greek chorus.

THE HAZARDS OF GOOD FORTUNE is about how we define what it means to be good, and how being good is never simple. It’s about family, power, money, African-Americans and Jews. Is Jay Gladstone an avatar of white privilege or a Job for our time? Is he a good guy? These are questions that readers will ponder and debate this fall.  I urge you to plan for review and feature attention, and I’ll be in touch soon to discuss the possibilities of coverage.

Why I Wrote THE HAZARDS OF GOOD FORTUNE

I began work on what became The Hazards of Good Fortune in 2011 shortly after I finished a two-year stint as a writer/producer on the HBO drama Big Love and wanted to write about a family that was not polygamous Mormons. I’ve always been fascinated by 1970’s New York City, where I moved when I got out of college. I worked as a feature writer for The SoHo Weekly News, and the stories I wrote took me all over the city—which, although culturally vibrant, was falling apart. In 1975, with the city on the verge of bankruptcy, the civic-minded heads of several real estate families (nearly all of them Jewish sons of Russian immigrants) banded together to pay their taxes in advance so the city wouldn’t go bankrupt. These multi-generational families put their names on libraries, university buildings, and hospitals but did not seek celebrity. These families were the models for the Gladstones, the family at the center of The Hazards of Good Fortune.

My father died in 2011. He wanted to be a writer. Instead, he became a successful advertising executive in New York City who weathered the storms of the 1970s. The heads of these families were his peers and he knew them socially. I went to high school with some of their kids; kids who have now inherited these businesses. To my knowledge, no novelist had written about one of these families. They are immigrant success stories; people who have achieved great power in American society in an arena whose inner workings remain largely unknown to the public. When I was in high school, I had a summer job at my father’s agency, and every day we drove into the city through the Bronx and Harlem. In the novel, I drew on memories of those conversations and on my impressions of the whole graffiti-splattered vanished city. Writing about my father’s world was a way for me to spend time with him.

The book depicts the racial kaleidoscope of our era. I have been fascinated by black American culture since I was in high school. Read Eldridge Cleaver in the eighth grade. Was obsessed by blues musicians, worshipped basketball players, particularly the playground legends. Getting to interview Kareem Abdul-Jabbar in my role as the host of the Los Angeles Review of Books Radio Hour was a life highlight for a New York kid. These interests in the context of 2018 have become retroactively problematic. To some, they smack of “fetishizing” or “othering.” There are well-meaning people who think a writer who is not a member of a particular group lacks “standing” to write about that group. There are black characters in The Hazards of Good Fortune, along with Jews, Italians, Russians, and WASPs. It’s a New York novel, for god sakes. One of the main characters is an NBA player.

I’ve been a diehard NBA fan since I was a kid, attended Knick games in Madison Square Garden and now I suffer with the Clippers in Los Angeles. A few years ago, I became obsessed with the Donald Sterling saga, where the Clippers owner was accused of being a racist, primarily because he was one. The NBA rightly booted him out. The novelist in me asked what if one of these latter-day Jewish tycoons, like the kind I grew up around, found himself in a Sterling-like situation, but maybe undeservedly. What he wasn’t a racist? Mark Twain said a lie gets halfway around the world before the truth can pull its pants on.

The protagonist of The Hazards of Good Fortune is a good guy. Mostly. And then he says something that gets misinterpreted. We’re in a cultural moment now where people are confused about who is allowed to say what. #MeToo and Black Lives Matter are ascendant. Power structures are being challenged. Our society is at an inflection point, and this seemed like the right time to pull on my rubber boots and wade into the national conversation.

“Greenland takes a Dickensian delight in letting the plot sprawl with parallels, digressions, false leads, and twists…An entertaining tale rich in schadenfreude as bad things happen to a hapless billionaire.”

“The Hazards of Good Fortune is a wild and funny page-turner of a novel that grabs you and doesn’t let go. I still have bruises.” —Larry David, creator of Curb Your Enthusiasm

Seth Greenland is the critically acclaimed author of five darkly funny literary novels. His writing has been praised in the New York Times, the Los Angeles Times, the Washington Post, and by several of his family members. Known initially as a Los Angeles writer of satire, the native New Yorker’s two most recent novels are set in the city of his birth. Currently, he considers himself a New York novelist who happens to live in Southern California. None of this explains his popularity in France, which remains a mystery. All of his books have been translated into French, a language he has been trying to master for years.

Greenland’s latest novel, The Hazards of Good Fortune, will be published by Europa Editions in August 2018. His four previous works of fiction include The Bones, which was pronounced “a remarkable debut” by the Los Angeles Times and “savagely funny” by the San Francisco Chronicle, as well as his second novel Shining City, which was a Washington Post Best Book of the Year. These books were followed by The Angry Buddhist, a “fine, high-end beach read for this election season” as reviewed by Janet Maslin for the New York Times, and Greenland’s fourth novel, I Regret Everything, pronounced “affecting and funny” in its review in the New York Times.  His books have been optioned and are under development for film and television.

In addition to his work as a novelist, Greenland is an award-winning playwright and screenwriter. His play, Jungle Rot, won the Kennedy Center/American Express Fund for New American Plays Award and the American Theater Critics Association Award. Anthologized in Best American Plays, it was published by Dramatists Play Service. His other produced plays include Jerusalem, Red Memories, and Girls in Movies. Television credits include a two-year stint as a writer-producer on the Emmy-nominated HBO series Big Love. Recently, he completed a stint as one of the original hosts of the radio show/podcast The LARB (Los Angeles Review of Books) Radio Hour, heard weekly in Los Angeles on KPFK.

Greenland lives in Los Angeles with his wife, the author Susan Kaiser Greenland. He is currently at work on his next novel.

Writing Is How David Corbett Makes Sense of His World