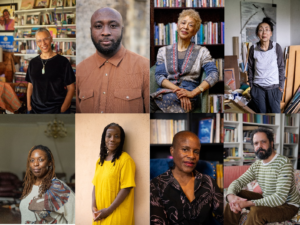 “I have been waiting for this all my life, not always believing but constantly hoping.

This award gives me space to dream.”

For the past decade, this major global prize has recognised eight writers annually for literary achievement across fiction, nonfiction, poetry, and drama, at every stage of their careers. With total prize money now exceeding $14m USD, each recipient is gifted an unrestricted grant of $165,000 USD to support their writing and allow them to focus on their work independent of financial concerns.

Mike Kelleher, Director of the Windham-Campbell Prizes, said: “Across ten extraordinary years, the Windham-Campbell Prizes have celebrated exceptional literary achievement and nurtured great talent by giving the precious gifts of time, space and creative freedom. We are proud to mark our 10th anniversary with the most exciting list of recipients yet. Led by a trailblazing group of global women’s voices, these writers’ ambitious, skilful, and moving work bridges the distance between the history of nations and a deeply personal sense of self.”

For Fiction, this year’s recipients are two Zimbabwean writers, Tsitsi Dangarembga and Siphiwe Gloria Ndlovu, who both explore their country’s history within their work. Dangarembga is a multi-award-winning novelist, playwright, filmmaker, and activist, whose debut novel Nervous Conditions was the first book to be published in English by a black woman from Zimbabwe and was named by the BBC as one of the top 100 books that have shaped the world. In September 2020 – the same week as her novel This Mournable Body was nominated for The Booker Prize – Dangarembga was arrested during peaceful anti-corruption protests in Zimbabwe’s capital Harare, charged with intention to incite public violence: she remains on remand. Siphiwe Gloria Ndlovu – who credits Dangarembga amongst the Zimbabwean authors who have inspired her work – was recognised with the Barry Ronge Fiction Prize for her sweeping debut exploring the colonial experience, The Theory of Flight, which sketches, through the lives of a few families and the fate of a single patch of ground, a nation’s history.

In Nonfiction, the Prize has rewarded Pulitzer prize-winning cultural critic, academic, journalist, and writer Margo Jefferson, lauded for her critically acclaimed biography, On Michael Jackson, and National Book Critics Circle Award winning memoir, Negroland, examining Black and white privilege. Nigeria’s Emmanuel Iduma, essayist, novelist, photographer, and art critic, has also been awarded a Windham-Campbell Prize for his work, including part travelogue, memoir, poetry collection, photo essay A Stranger’s Pose, which traces his travels around Africa and closes the gap between memory and imagination. Iduma’s deeply personal memoir on the aftermath of the Nigerian civil war, I Am Still with You, will be published next year.

For Drama, London’s award-winning playwright, dramaturg, and the first black British female writer to have a play produced by the Royal National Theatre, Winsome Pinnock, has been recognised. Described as ‘the godmother of black British playwrights’ Pinnock’s extraordinary canon of work offers a mesmerising and unflinching journey through British history, identity, and culture, exploring issues such as poverty and police brutality, immigration and enslavement. Alongside Pinnock, Doris Duke Performing Artist and institution in American theatre, Sharon Bridgforth, is celebrated for her abstract theatrical jazz and performance literature, steeped in the captivating storytelling of the Black South and infused with ritual, interaction, and community.

In Poetry, two very different writers have been selected: British born poet Zaffar Kunial and the distinctively experimental Wong May. Born in China, raised in Singapore, and now living in Ireland, Wong May’s career spans more than six decades, with her most recent collection – the tender and wrenching Picasso’s Tears – appearing after a literary absence of more than forty years. Zaffar Kunial’s debut anthology Us was published to much acclaim, nominated for both the Costa Poetry Award and TS Eliot Prize, tracing the roots of language to explore his sense of self, heritage, and cultural identity.

The Prizes were the brainchild of lifelong partners Donald Windham and Sandy M. Campbell. The couple were deeply involved in literary circles, collected books avidly, read voraciously as well as penning various works. For years they had discussed the idea of creating an award to highlight literary achievement and provide writers with the opportunity to focus on their work independent of financial concerns. When Campbell passed away unexpectedly in 1988, Windham took on the responsibility for making this shared dream a reality. The first prizes were announced in 2013.

The Prizes are administered by Yale University’s Beinecke Rare Book & Manuscript Library, and nominees for the Prizes are considered by judges who remain anonymous before and after the prize announcement. Recipients write in the English language and may live in any part of the world.