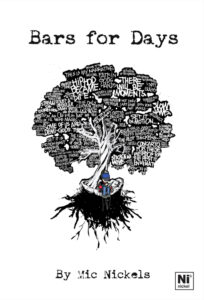 Editor’s note: The journey from son of a single, teenaged mother to becoming a rapper, musician, hip hop emcee and producer Mic Nickels is told with clarity and precision in the recently released BARS FOR DAYS. Here the rapper shares his writing journey.

Everything is Martial Arts…

For years this has been a mantra of mine, and it is something that I often preach to my
children as well. If you want to achieve something or learn to become something, it can be
attained through focus, lots of practice, and a commitment to self-improvement. As a child, I
became familiar with this concept while training religiously at my Tae Kwon Do Academy, where
I received my black belt at the early age of eleven. As an adult, I have been able to apply these
methodologies to my musical career, as a self-taught rapper and producer who eventually moved
on to put out over a dozen albums independently. So when I set out to document this journey into
musicianship in the form of an ethnographic memoir, it is with this same discipline that served as
my guide.

“… I at first found myself aimlessly writing, struggling to find my voice.”

I had been penning lyrics for decades by this point and excelled in my writing classes
upon returning to the University of Miami to finish my bachelor’s degree. Taking on the creation
of a full-length book was entirely foreign to me, however, and I at first found myself aimlessly
writing, struggling to find my voice. Being free of the restrictions of rhyme cadence set in the
format of sixteen bar intervals was liberating though, and I enjoyed the process, sitting down to
write three to five hours each day during COVID-19 lockdown. This extra time I was afforded
due to the pandemic was obviously not planned but seemed to be a godsend in regard to me
actually being able to commit to the attention needed to complete this daunting project. In my
head, I often heard my professor’s advice, which she offered frequently after reading my
submissions, “Slow down. Let the reader work for it.”

“…I became acutely aware of where this story was heading.”

As I approached the halfway mark of this endeavor I began to find my literary mojo, with
the sentences gelling into poetry, and the imagery becoming more vivid. Mostly, I had been
hashing out short stories without much consideration of what my end goal would be, when I
received life-altering news. I’m pretty sure for the average person, finding out their mother was
diagnosed with terminal cancer would act as a catalyst for shelving any creative projects. In my
case, it lit a fire under my seat, sending me into a state of deep reflection, with each writing
session serving as therapy. I had been debating how this book would end, but as my mother’s
illness progressed, and the premise of losing her seemed more probable, I became acutely aware
of where this story was heading. She and I were extremely close, and we had been through so
much since my early days on this planet, it would only make sense for her to play the role of
B-character in my personal saga.

During the months after her passing, I became obsessed with finishing this project in her
honor. This was to be her story just as much as it was mine. As I pushed on though, I began to
realize this was bigger than Mom or myself. What I was putting together had inadvertently
morphed into a cultural representation of the hip hop generation; my generation in particular, that
grew up parallel to the rise of this musical genre. Through much introspection, I began to
understand the extent of importance this movement meant for society, especially in regard to the
racial barriers it helped break down. There is a political undertone embedded within the rise of
hip hop that has been swept under the rug in recent years. Incoherent mumble rap and harmonic
pop songs that sound more like R&B than lyrical contributions have taken over the airwaves,
pinning the mainstream form of this music as not much more than materialistic sing-a-longs from
underprivileged neighborhoods.

“Immediately after typing the final words…I slumped over into a ball of relief, joy, and disbelief.”

Immediately after typing the final words of the manuscript, I slumped over into a ball of
relief, joy, and disbelief. The roller coaster of emotions that had been flowing through me over
the previous year, had taken a toll. I took a few weeks to breathe, before powering through one
thorough revision, and passed my Google Doc file onto my editor Taya, who graciously helped
me whittle down the monstrous submission, splitting up my uber long paragraphs, all while
proofreading and formatting it all into something that resembled a book. I knew in my heart the
end result was worthy of publishing, but a conversation with a good friend who works in the
literary world put something into perspective. Being taken on by an actual publishing house
would be a dream come true, but the release date would no doubt be delayed two to three years
from the moment the contract was signed to the day any copies reached the shelves of a
bookstore.

“I tell aspiring artists to be bold, forge their own paths…”

For most first-time authors this wait would have been welcomed as a more than
acceptable “good problem to have,” but I had already recorded a companion album that would
not maintain its status of relevance as long as its printed counterpart. It needed to be released as
soon as possible. The only way to circumvent this dilemma would be to self-publish Bars for
Days, and hope the buzz would lead to a fully housed second edition in the future. Being an
independent musician had groomed me for this moment. It’s the same general game with
variances in the basic rules and regulations. In the creative realm, trial and error serve as the
only true tutorial for advancement. In the entertainment business, there is a similar dynamic, with most laws deemed as flexible. This sense of general ambiguity leaves the steps to achieve
success drafted out of gray lines that very often cannot be replicated. This is why I tell aspiring
artists to be bold, forge their own paths, embrace the creative process without any material end
goal in mind, and of course, practice relentlessly.

About the author’s book

Bars for Days is an ethnography/autobiography written by a rapper who grew up alongside the rise of hip hop and into the information age. The story highlights a specific subculture that emerged towards the tail end of Gen-X, whose importance to society often gets overlooked.

The book was also released alongside an album with the same title and cover, which features several Grammy winners, including Method Man from the Wu Tang Clan.

The Art of Fiction: Naked Dreams: Why Writers Don’t Write!