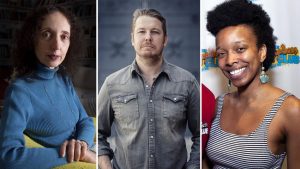 Best-selling authors Joyce Carol Oates and Fredrik Backman will be among the headliners at this year’s Printers Row Lit Fest, June 9-10.

The festival, which is owned by the Chicago Tribune, sets up shop in the streets of the South Loop for a book fair and dozens of events featuring authors, celebrity chefs and cultural icons.

“It’s exciting to bring new voices into the mix with established, venerable authors like Joyce Carol Oates,” said Chicago Tribune literary editor at large Elizabeth Taylor. “You can go from one to the other — it’s the real joy of the festival.”

Backman, who lives in Stockholm with his family, dropped out of college, according to The New York Times, and at one point supported his writing by driving a forklift. His breakthrough novel featured the unlikeliest of heroes: Laid off from his job and mourning his recently deceased wife, 59-year-old Ove (OO-vuh) is methodically planning his own death. But Ove’s motives are surprisingly complex, and his terse wit and twisted charm won the hearts of readers, both in his native Sweden and abroad.

The book, published in the U.S. in 2014, has been on the New York Times best-seller list for paperback trade fiction for 90 weeks. It became a movie in Sweden, and an English-language adaptation starring Tom Hanks is in the works.

Backman’s other books include the best-sellers “My Grandmother Asked Me to Tell You She’s Sorry” and “Beartown.”

Now entering its 34th year, Printers Row Lit Fest brings over 100,000 attendees and hundreds of authors and booksellers to the historic Printers Row neighborhood just south of the Loop. This year’s festival is scheduled for June 9-10, on Dearborn Street from Harrison Street to Polk Avenue and continuing on Polk to State Street. Indoor programming will be held at venues including Jones College Prep high school.

The festival, as well as most of its programming, is free and open to the public.

Information about programming and tickets will be available at the Printers Row Lit Fest website. Organizers expect to announce additional speakers in the coming weeks.