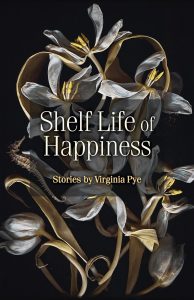 Virginia Pye had always written, but when she took a class from Annie Dillard at Wesleyan University in Connecticut she began to get a deeper sense of what writing requires. “We worked on one story for a single semester. I learned then that writing is rewriting and it is important to be tough with yourself,” said Pye.

I learned then that writing is rewriting…

That practice of writing and rewriting, sending stories to literary journals and revising them when they came back, led to the development of her short story collection, Shelf Life of Happiness. The stories in the collection, some of which appeared in The Baltimore Review, Tampa Review and Prime Number Magazine, deal with regular people as they try to navigate the complexities of relationships and the challenges of communication. “Chekhov wrote about everyday people in regular circumstances, where all their foibles, confusion and mistakes were revealed. His characters bungled things up, but he didn’t look down on them. People trying to do their best; those are my people,” said Pye.

Her stories were written over the course of twelve years and several were finalists in writing competitions. During that time, Pye authored two novels, Dreams of the Red Phoenix and River of Dust. “My short stories cover a smaller canvas, a shorter period of time. They deal with a singular revelation or series of revelations,” said Pye. Her novels, both set in China, deal with broader themes and often start with the exploration of a setting or landscape, which she populates with characters.

The inspiration for Pye’s short stories “tends to come from little moments, little gems, that offer insight into life and character. They come from key moments where something crystallizes the meaning of life.”

One such incident, when on Easter morning she found her son had dug up a dead bird that had been buried in the backyard, became the inspiration for her story Easter Morning, with its themes of death and resurrection.

Art comes from trying to understand how others see things.

The title, Shelf Life of Happiness, comes from the focus on the characters’ striving and longing for happiness, however fleeting it might be. Pye relishes the opportunity to explore the ambiguity that comes with human communication. “Art comes from trying to understand how others see things. Perspective is like a prism, there are lots of ways to see things,” said Pye.

She works to make sure the endings of her stories give the reader a sense of what is happening and where the story stands.

The greatest challenge when developing the collection was the “continuous revising” as she worked on the stories over the years. “The challenge is to keep trying to figure out what the stories are about and to stay interested enough in them to make them better.”

The collection found a home with Press 53, where it was a finalist twice in their annual contest. Editor Kevin Morgan Watson helped Pye shape the collection into a cohesive whole in terms of themes and point of view (third person).

Pye urges apprentice writers to take their time and not share their work with peers until they find their voice and feel confident. “Do develop peer relationships, go to readings, and go where writers are. But get a few drafts in and have a sense of what your work is so that you know what to make of feedback when you get it.”

She is currently working on a historical novel, set in the 1890s, about a woman writer seeking parity.

Virginia Pye is the author of two award-winning novels, Dreams of the Red Phoenix and River of Dust, and a short story collection, Shelf Life of Happiness. Her stories, essays, and interviews have appeared in The North American Review, The Baltimore Review, Literary Hub, The New York Times, The Rumpus, Huffington Post and elsewhere