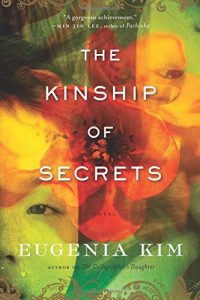 The Kinship of Secrets, Eugenia Kim, Houghton Mifflin Harcourt – When the Chos left Korea in 1948 for America, they brought one daughter, Miran, but left their baby Inja with their family in Korea. They always meant to return, but time went by and Inja grew up during the difficult years of war and deprivation with the only family she knew. To Miran, Inja was just a storied sister her mother devotedly sent packages to through the years. Political and financial circumstances keep the family apart for so long, if they finally are able to reunite, the sisters will be strangers with vastly different cultural backgrounds.

AUTHORLINK: What was the first thing about the story that came to you?

These talks with Sun exposed the trauma of separation…

KIM: In researching my first novel, The Calligrapher’s Daughter, I went to South Korea for the first time in 2005, with my sister, Sun, whose life is fictionalized in The Kinship of Secrets. She was raised there and spoke Korean fluently, which made my trip so much easier. While we had grown close over the years, it had never occurred to me to ask her what it was like to have come to America at age 11, after being separated from our family for a decade. I had assumed that she, like many immigrants, would have been pleased or excited to move to the United States. Her answer, that it was “the blackest day of my life,” stunned me. Thus, began a series of interviews in which I discovered more about her young life in Korea, notably during the Korean War years and impoverishment during the slow reconstruction of that country. These talks with Sun exposed the trauma of separation she felt from the uncle who had raised her. This was the story that felt most compelling to me, though I didn’t write about the actual separation until the foundations of the story had been laid and I knew the characters more intimately.

AUTHORLINK: How much of your story is based on experiences of your own family?

KIM: A great deal of the novel is based on true experiences of my family, and especially of my sister’s life. I did fictionalize the age of her arrival, sixteen in the novel, to make her more emotionally mature, and I did compress five siblings into the one sister in America. While it is a story heavily based on life, they are fictionalized characters living in a novelistic world, which is a contained kind of orderly sprawl that I hope conveys certain emotional truths of life.

AUTHORLINK: Were some parts that were based on your family difficult to write?

KIM: The difficulty was in working to hone the family history into stories that worked within the novel such that they were not mere anecdotes but had dramatic purpose in the arc of the overall story.

AUTHORLINK: What research did you do for the story?

KIM: I did extensive research into the Korean War and postwar South Korea. I refreshed my memory of the 1960s and 70s American history, which I had lived through. I was able to find some resources in English that looked at the Korean War with a Korean perspective, and this was tremendously helpful. I visited South Korea again in 2010 to see the neighborhood where my sister and her family lived as refugees during the war, and it helped to visualize those scenes. Images were a key component to my research, and along with family photographs and an ever-growing Internet, I was able to compile hundreds of images of civilians during the war, and street life in the decades that followed.

AUTHORLINK: How do the characters in your book demonstrate the challenges of cultural differences and evolving social expectations?

KIM: The parents, Calvin and Najin, exemplify differences in cultural assimilation to America. Calvin, having previously studied in America, is fluent and easily walks the line between Korean and American. He could be considered the “successful immigrant” of the 1950s–1970s, maintaining his culture by working as a leader in his Korean American community, while fostering his family’s adoption of American ways. Najin, preferring to preserve her Koreanness for when she is reunited with her daughter, is less Americanized to the point of not speaking English very well. The two sisters, one raised in America, the other raised in South Korea, also exemplify cultural difference. Miran in America feels alienated from looking Korean but—being Americanized as a result of going to public school—not feeling Korean. Inja comes to America and must adapt to losing her culture and family back in Seoul, and though she never forgets, she subsumes her Koreanness in order to find belonging in America. This is one of the fallacies of immigration—that one must assimilate and become “Americanized,” when one hopes nowadays there is room in our society to broadly accept cultural differences.

AUTHORLINK: How was your experience in writing and selling your second novel different from your first?

Having tasted success, failure was a mere flip side away.

KIM: The writing of each novel was equally hard, but it did, at seven years, take half the time to write the second novel than it did the first. Being a debut author was thrilling for its foray into the unknown and, in my case, the lovely reception my first novel received. The second novel brought more anxiety, because all the romantic notions had played out, and the market had changed so much in between the two publications. Having tasted success, failure was a mere flip side away. For the second novel, I was fortunate to have the backing of my agent and my first editor behind me, so even though an earlier draft was passed on, my editor had enough faith in me to look at an extensive rewrite, which she accepted.

AUTHORLINK: Are your two novels related in any way?

KIM: While it stands on its own, THE KINSHIP OF SECRETS is also a continuation of the story begun in THE CALLIGRAPHER’S DAUGHTER, following the next generation of that family. Both are inspired by family history.

KIM: I think I’m out of family stories to tell! But I’m working on a story whose main action takes place in postwar South Korea and its ramifications in America in later decades . . . It’s a story in part inspired by a Korean law on the books until 1964, that said a wife was the property of her husband who could by law enact her murder for wrongdoing.

About the Author: Eugenia Kim’s debut novel, The Calligrapher’s Daughter, won the 2009 Borders Original Voices Award, was shortlisted for the Dayton Literary Peace Prize, and was a critics’ pick by The Washington Post. Her stories have appeared in Asia Literary Review, Washington City Paper, Raven Chronicles, and elsewhere. Kim teaches in Fairfield University’s MFA Creative Writing Program and lives in Washington, DC. 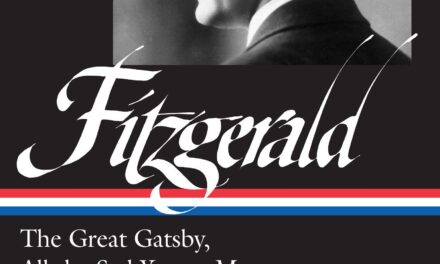 Interview: F. Scott Fitzgerald: The Great Gatsby and Other Writings 1920–26

Green on Blue, a War Within Human Hearts