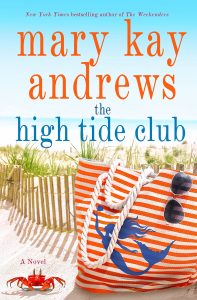 “From the New York Times bestselling author of The Weekenders comes a delightful new novel about new love, old secrets, and the kind of friendship that transcends generations.” Amazon

AUTHORLINK: Ms Andrews, thank you for your time today to discuss your latest release, The High Tide Club. The main protagonist in your book is Brooke Trappnell. Describe her; what is she like? Your readers first met her in your book Save the Date (2014) when she had a

…Many of my books feature women characters who reinvent themselves,wedding crisis. What made you feel like giving her a starring role in The High Tide Club?

ANDREWS: I literally left Brooke up a tree in SAVE THE DATE, but in the years since, I wondered what had happened to her. Many of my books feature women characters who reinvent themselves, and I was intrigued to figure out what Brooke’s next chapter would be.

AUTHORLINK: You once wrote critically acclaimed mysteries – namely the Callahan Garrity series, under your real name, Kathy Hogan Trocheck. You then created a new pen name (inspired by the names of your children) and launched into a different style of fiction – the breezy, southern romance with a bit of mystery thrown in. Perfect for the beach! The first book you wrote in this style was Savannah Blues (2009) which was nominated for an Edgar award for Best Mystery of the Year. What made you decide to mix up your genre a little? Was your publisher open to the suggestion at first? Is this commercial fiction, ‘Beach Read’ genre your favorite to write so far, as compared to your previous category mysteries?

ANDREWS: Switching genres from mystery to women’s fiction was an accident. When I started writing SAVANNAH BLUES, I thought it would be another mystery. But when I’d solved the crime and turned in the manuscript, my editor sent it back, telling me I needed to solve my protagonist’s relationship crisis, because readers cared about that more than the “whodunit” aspect of the plot. At that point, we decided to market the book as straight fiction instead of mystery. We were all stunned when that book out-sold all my mysteries combined. That said, with my past three novels, I’ve swerved back into the mystery lane. I’m enjoying the challenge, but I’d forgotten how tough it is.

AUTHORLINK: You once said, “I’d love to have a New York Times number-one best-seller to prove to my former managing editor that I really can write.” (Novel Rocket, 24 July 2009). That has since happened, with The High Tide Club and many others, which must be very gratifying. Your mysteries have also been nominated for the Edgar, Anthony, Agatha and Macavity Awards. We are curious about your previous editor. What was their constructive criticism of your writing? How do you feel your writing has evolved since your first Garrity book in 1992?

ANDREWS: I still haven’t reached my goal of having a number-one-bestseller—although with THE HIGH TIDE CLUB and WEEKENDERS, I did make it to number three, so I guess I’ll just have to keep writing to prove that editor wrong. And by the way, that editor didn’t have any real constructive criticism, just a burning need to keep another uppity reporter in her place. I hope my writing is evolving and improving with every book because I’m still very much a student of the craft.

AUTHORLINK: You lost about 55 pounds in 2012. You became a fit, happier and healthier version of you. Did you find your writing routine changed as well? Did your actual writing alter in some way?

ANDREWS: Oh God. How Google allows the past to haunt us. I’ve been a yo-yo dieter for the past five years. I lose weight in the build-up to pub day, then go on book tour and slowly my exercise and diet routine go to hell. Let’s just say I’m a work in progress…

AUTHORLINK: It’s understandable with your schedule. Who is your first reader? How many times do you go through your manuscript before you send it to your agent for review and then how many times does he or she edit it? After that, how many times is it reviewed by your editor at your publishers?

Because I seem to always blow my deadlines, we’re always in a race against time.

ANDREWS: My editor and agent are reading the book in installments, as I write and offering critique and encouragement. And now that my husband is basically retired from corporate life, he’s become my first reader, because he’s a right-brained engineer and great about picking up the nit-picky timeline issues I invariably mess up. I’m not a multiple-draft writer. I might have fits and starts at the beginning of the book, and my editor will work with me until we’re both satisfied, then it’s off to the races. I submit the manuscript, my editor and I discuss and she sends me an edit letter with her comments about big-picture stuff for revisions. When the revisions are done, we discuss again. Because I seem to always blow my deadlines, we’re always in a race against time. Once the revisions are in, she does a line edit, then its off to the copy edits for another round. Finally, I get page proofs to review and a last chance to fix typos, etc.

AUTHORLINK: This really resonated, “I use darkness and shadowing in my work because that’s reality, but my end goal is always sunshine. Not perfection, certainly, but a feeling of optimism.” (Bookreporter, 19 May 2016). We wish more writers were like you! Why do you think so many people like to read books with such awful, dreary subject matter and sad endings?

…I think we are currently living in some dark times, and I find my writing reflecting that…

ANDREWS: I can’t speak with any kind of authority about the tastes of the reading public. I only know what I like to read, and what my fans tell me they like. That said, I think we are currently living in some dark times, and I find my writing reflecting that more than it did in the past. It’s my fervent hope that I’ll soon reclaim the light—both in real life and in my fiction.

AUTHORLINK: A lovely way to put it! Ms. Andrews, it was so lovely talking to you today! Enjoy the rest of your book tour and thank you for your time. We look forward to your next delicious beach read.

She has been nominated for the Edgar, Anthony, Agatha and Macavity Awards. A native of St. Petersburg, Florida Trocheck earned a B.A. in journalism from the University of Georgia in 1976. She started her professional journalism career in Savannah, Georgia, where she covered the real-life murder trials which were the basis of Midnight in the Garden of Good and Evil. She left journalism after a ten-year stint as a reporter for The Atlanta Journal-Constitution.

About Anna Roins: Anna Roins is a lawyer, previously of the Australian Government Solicitor, as well as a freelance journalist.

She has studied creative literature at The University of Oxford (Continuing Education) and the Faber Academy, London. Anna enjoys trying to write novels and is a regular contributor to AUTHORLINK assigned to conduct interviews with best-selling authors. 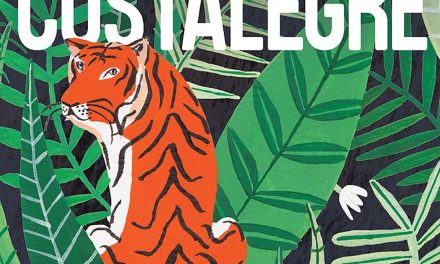