The Poison Bed by Elizabeth Fremantle 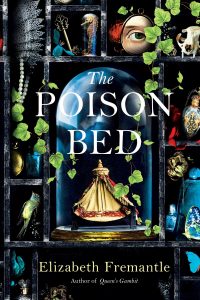 In the Court of King James I of England, few have risen as swiftly or so high as Robert Carr, Earl of Somerset. Born in Scotland of humble origins, Robert is the King’s secret lover and earns titles and land as a reward, but his favored status gains him many enemies at court. Seeking to conceal his illicit relationship with the king, with James’ blessing Robert engages to marry the beautiful Frances Howard, niece of the powerful Earl of Northampton. The small matter of Frances’ marriage to the Earl of Essex can be overcome, but a dangerous threat arises in the form of Robert’s mentor and erstwhile lover, Sir Thomas Overbury. The jealous Overbury threatens to reveal Robert’s relationship with the king unless Robert abandons his plans to marry. Homosexuality is illegal in England—but no-one dare accuse the king of such a crime. Overbury has overstepped the mark.

Fremantle takes a real-life story and creates a dark and deeply fascinating narrative.

At Robert’s behest the king offers Overbury the ambassadorship to Russia to get him out of the way. Overbury’s refusal of the royal command lands him in the Tower of London and a painful death from poisoning. Freed of blackmail and with her marriage to Essex annulled, Robert and Frances marry, but their enemies force the king to order an inquiry into Overbury’s death. The couple are arrested and accused of murder. Locked in the Tower Frances confesses to the crime, but Robert is more stubborn. Witchcraft, treachery and manipulative courtiers muddy the waters as their trial continues. Are Robert and Frances really guilty, or are they taking a fall for the king?

The glamour, treachery and intrigues of the Jacobean Court come to life in The Poison Bed. Fremantle takes a real-life story and creates a dark and deeply fascinating narrative.

Crushed by Laura and Tom McNeal

A Scattered Life by Karen McQuestion