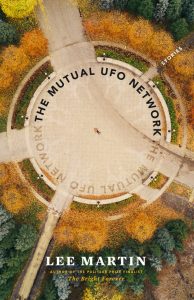 His first story collection, The Least You Need to Know, won the 1995 Mary McCarthy Prize in Short Fiction. Martin has gone on to write five novels including The Bright Forever, for which he was a Pulitzer Prize Finalist.

Martin’s terrain is small towns and the people who inhabit them, going about their lives as they discover that their lives are entangled with the fate of other human beings around them.

This collection begins with The Mutual UFO Network, which tells a story of family estrangement between a man who falsifies UFO evidence and his wife and son. The story highlights the themes of alienation and brief moments of illumination that will run through the collection.

Several stories were striking in the depth of their humanity and complexity of their portrayal of the human condition.

“Belly Talk” focuses on Jackie, a boy with a limp, who uses ventriloquism to amuse his classmates.  After trading barbs, Jackie forms a bond with Eugene Marks, a classmate with an abusive father. The connection is made after Eugene shows Jackie his scars. Martin describes Jackie’s empathic reaction in exquisite detail:

Something fluttered inside Jackie. He thought of the way his hip sometimes ached at night, and he longed for someone to make it stop. He couldn’t keep from tipping his own head down until it touched Eugene’s. Jackie felt Eugene’s silky hair on his forehead and thought it the most delightful sensation, the soft tickle of that wispy hair.

When Jackie apologizes for doing an impression of Eugene, Eugene responds with:

“There’s all kinds of mean.” Eugene’s voice was a hoarse whisper.

Martin’s truth lies in the fullness of his characters. When Jackie and his father go to collect a debt from Mr. Marks, who called Jackie “a cripple,” we see another side of the cruel man. Jackie and his father spy Marks removing the seeds from orange slices and feeding them to Eugene, as if his son were a baby bird. In spite of this moment of grace, the story ends tragically.

Martin’s truth lies in the fullness of his characters.

The book ends with the story “Dummies, Shakers, Barkers, Wanderers.”  A couple struggles to help their son, who is addicted to meth. When a foal is born with neonatal maladjustment syndrome, which causes it to bark like a dog, the vet’s words echo the challenges the couple already faces with their son:

“A real mystery. We’ll do what we can and keep our fingers crossed.”

As the story ends, a mother is watching her drug-addicted son tend to the sick foal. She thinks of the future with hope and fear. The story ends with a note of optimism that despite our alienation we might find a way to connect with one another:

She told herself that there were days and days ahead of them—days and days and months and years— time enough for anything to happen. Anything, she thought, and a shiver passed over her. The world was so lovely, and yet so frightening. It lay against her, weighty and splendid, a promise alive and trembling at the heart of ruin, waiting for her to claim it.