The Braid by Laetitia Colombani 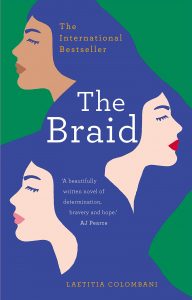 Laetitia Colombani’s most inspiring novel, “The Braid,” takes us on a breathtaking journey, laced with valuable historical perspectives of three women facing different obstacles, mostly obscure, and almost beyond our comprehension to grasp and fully understand the choices they make to survive.

Smita is a Dalit, a class of people known as the “unworthy,” and “untouchable,” who are not even considered a member of any of India’s unique four caste systems, “a species apart, judged too impure to mix with others, rejected and separated, like the chaff from the wheat.”

Her fate in life, or dharma, is to collect “other people’s shit,” barehanded, from dry latrines. Her husband scours rats from the field, that become their evening meal. But Smita is determined that her daughter, Lalita, will learned to read and write. Their journey is perilous.  Any Dalit who attempts to escape encounters various forms of torture and even death, as are other members of the family.

Meanwhile, across the ocean, in Sicily, Giulia’s family for centuries has made “its living from the cascatura, the Sicilian custom of keeping hair after it has fallen out or been cut, in order to make hairpieces or wigs.” But this tradition of Sicilians selling their hair was ending, and the family workshop was in bankruptcy.

Guilia, who had already demonstrated her independence in the community by falling in love with Kamal, a Sikh who’d fled Kashmir, and immigrated to Sicily after the 1984 Indian army attack against Sikh independence, is determined to save the business. Kamal comes to Guilia’s aid in spite of family protests.

In yet another parallel life in Canda, Sarah has broken through the glass ceiling to become a partner in a law firm, but it all shatters when she discovers she has the “the curse of Ashkenazi women.” She carries the mutant gene BRCA2, breast cancer. Her fight against the disease and discrimination against cancer patients in the workplace demonstrates a newfound form of bravery.

How the lives of these three women intersect is the magic of a great storyteller, and Colombani has achieved this in her first, and most intriguing, novel. It’s a highly explosive story, filled with drama, sorrow and triumph, and is highly recommended.

Heart and Soul by Maeve Binchy