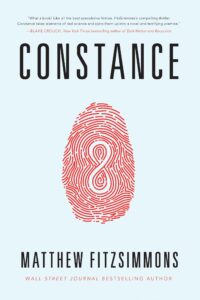 The protagonist in Matthew FitzSimmons’s futurist novel, “Constance,” has no memory of the eighteen months prior to her death, and then, awakening as a clone. So begins this gripping, and eerily possible fictional thriller.

Constance “Con” D’Arcy had been submitting to uploads: A “…perfect image of her consciousness, her memories,” to be stored at the Palingenesis Center. A microchip would activate when she died and a clone would then emerge.

But when Con (her preferred name) awakens as a clone it is clear something has gone awry. Her aunt, Abigail Stickling, the cloning genius, has committed suicide. A new director wants to delete Con’s clone but someone is interested in whatever has been downloaded into her memory. Constance was born in 2016, but her new birth date is 2038.

This thriller accelerates as Con is secreted out of Palingenesis, provided medication to aid in her transition and given a communication device (LFD). But when Con goes to her apartment, she finds it occupied by another tenant, and discovers three menacing “goons” waiting to capture her. Also a message appears on her LFD from the police who wants her help. She opts for the police who tell her she’s been murdered, and her husband (she had no husband before her last download) is the suspect. Desperate to fill her memory gap and to understand why she is being hunted down, Con set outs on her own.

When she encounters serious danger she’s rescued by Vernon Gaddis, her aunt’s former partner, who was killed in a plane crash and is now a clone. Gaddis believes Abigail downloaded data into Con’s brain.

Bizarrely, this fiction doesn’t seem so unreal. Stickling and Gaddis became wealthy when the USA contracted with them to replace dead soldiers with clones to pursue “America’s endless wars.” And Congress is unable agree on clone-protection laws so states have their own statutes. Con is safe in DC, but in Virginia she’s fair game for lynching. And Gaddis wants the Supreme Court to rule that clones are humans.

Author FitzSimmons leaves many loose ends and characters that are not fully developed. It appears this is may not be a standalone book but rather the beginning of a series, like his Gibson Vaughn five-book thriller set.

The Globe: The Science of Discworld II by Terry Pratchett with Ian Stewart and Jack Cohen