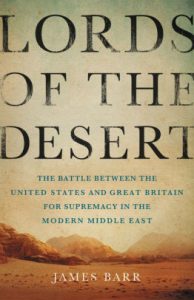 Lords of the Desert

James Barr has written a fascinating book with wide-ranging implications for all of us in the Western world. The developed world’s reliance on cheap Middle Eastern oil led to many Faustian bargains, several of which are outlined in detail in the text.

His exhaustively well-researched narrative citing many new sources gives a blow-by-blow report of the many events which led to the modern Middle East we are familiar with from news reports. Daily price changes in gasoline and diesel are a reflection of the realities of unstable supply and growing world demand. The many continued reasons for political instability in the region, escalating hand-outs to the producers and other political factors are well explained.

The history of the Middle East covered is from 1941 – 1967 from the closing stages of the Second World War to the final decline of British influence and their expulsion from Palestine, Iraq, Iran, and Egypt. The implications on the pound sterling and economy of the UK is also covered. The loss of Abadan, and particularly Aden were devastating.

The book covers the diplomatic background to the formation of Israel, Palestine and modern Jordan, the Suez Crisis of 1956 and the rise and fall of Gamal Abdul Nasser of Egypt and the Muslim Brotherhood.  It provides an understanding of how the modern boundaries of Syria, Lebanon, Israel, and Egypt were set prior to the original agreements reached at the end of the First World War when the Ottoman Empire was dismantled.

The shifting objectives of successive British and US governments are on display. Prime ministers from Churchill to Douglas Home and Presidents from Roosevelt to Lydon Johnson are quoted from official archives and anecdotes. The parlous state of British finances after the Second World War and “sacrificing of Empire for Socialism” by Lord Bevan provides a clear motivation for the decline of the British Empire not understood from the daily press.

In some cases, they actively incite revolutions to remove a recalcitrant government.

The multiple shuffling of heads of state and toppling of governments after 1945 from Persia (Iran) to Yemen provides a fascinating picture of outright skullduggery. The actions of British Intelligence MI6 and the United States OSS (later CIA) go way beyond monitoring the situation. In some cases, they actively incite revolutions to remove a recalcitrant government. Often the two intelligence services work at cross purposes deliberately hiding their activities from the other.

The realization is that the roots of the “modern” wars of the last thirty years, the first Gulf War, the invasion of Kuwait and later Iraq are all part of a continuum in the turbulent period covered by Mr. Barr.

Actual diplomatic cables from many sources are quoted along with anecdotes from cabinet papers and memoirs adding a sense of impetus to the tale from both major players, the USA and Great Britain. The jockeying for advantage, double-dealing, bribery, and outright backstabbing by all parties are covered in detail.  It is not a pretty picture!

The book goes way beyond the history, formation, and growth of the major oil companies…

The book goes way beyond the history, formation, and growth of the major oil companies covered in the “Seven Sisters”. The intense lobbying of their respective governments and participation on the ground in the Middle East were behind many of the government actions described.

The reader comes away with a renewed understanding of the many reasons for the deep enmity of many in the Middle East to both Britain and the USA. In particular the intractable nature of the Israel /Palestine question and an understanding of the modern interests and sensitivities of major players from Turkey (the old Ottoman Empire) to Egypt, Yemen, Saudi Arabia, and Sudan.

This book provides a new understanding of the roots of today’s Middle East and is essential reading for any student of international politics, the oil industry, and the diplomatic service. As Edmund Burke is reputed to have said: “Those who don’t know history are doomed to repeat it.” 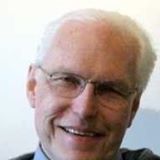 The reviewer Stan Booth was involved with the International Oil Industry for 15 years.

The Magicians by Lev Grossman