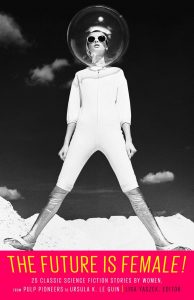 The Future is Female!

Shocking, disturbing and awe-inspiring is Lisa Yaszek ’s compilation of 25 science fiction and pulp stories, all written by women, in a special publication by The Library of America,The Future is Female!  It comes with a warning: Visionary women writers in this landmark anthology may permanently alter your perception of American science fiction.

And indeed it will. These stories defy the notion the science fiction genre was created by, and for, males. But as is evident from biographical information included in this book, these talented female writers produced numerous insightful, intellectual and intriguing plots for various sci-fi publications.

Yaszek smartly placed the stories in chronological order beginning in 1928 and ending in 1968, so the anthology is more like a single futurist novel influenced by political and social events at time of authorship. But each story is also dramatically different and can stand alone.

The first offering, The Miracle of the Lily, by Clare Winger Harris, written in 1928, focuses on time when all vegetation on earth has been destroyed by insects. Humans have managed to survive with the construction of “oxygen plants.” Meanwhile, planet Venus is being infested, and seeks earth’s assistance. Alas, humans were more interested in conquering that helping. Harris writes: “Man is not happy, unless he has some enemy to overcome,” a fitting introduction for the next story by Leslie F. Stone, The Conquest of Gola, when a women-run, peaceful society is disrupted by military weapons by men from Earth arriving to commercialize the planet.

A tragic story written in 1957 resonates in today’s racially charged atmosphere. In Leigh Brackett’s, All the Colors of the Rainbow, Galactic Center sends a scientist to Earth to halt destructive climate change. Ruvi, a weather-control engineer and his wife Flin arrive on Earth, decide to take a drive, see places and meet people. The couple, whose bodies are green, drive into a one small town where they are accosted by locals who shout and point, “Green niggers,” and beat them beyond consciousness. Ruvi says, “I walk among wild beasts.”

Only a handful of women chose to use male pseudonyms, according to Yaszek, because most sci-fi magazine editors were interested in good stories and didn’t care if they were written by men or women. However In the story, Another Rib, cowriter Juanita Coulson used the pseudonym of John Jay Wells, because her editors were nervous about “sexual overtone” in 1963. It’s about Earthlings stranded on another planet, encountering an alien who knows how to alter a man’s body so he could birth a child.

This powerful selection of stories are memorable and intellectually stimulating. It’s refreshing to read women-written fiction on space travel, encounters with aliens and super intelligence, all featuring notable females with vision and knowledge.

The Altman Code by Robert Ludlum and Gayle Lynds

Writing with the Master: How One of the World’s Bestselling Authors Fixed My Book and Changed My Life by Tony Vanderwarker