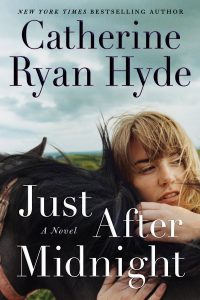 Thirty-something Faith escapes her abusive husband Robert and seeks refuge at her parent’s California beach house. Waking early one morning, she spots a teenage girl trying to meditate in front of the house and checks to see if she’s okay. The girl is Sarah, and their encounter on the beach triggers a transformation in the fortunes of them both. Faith felt adrift and aimless once the shock of leaving her husband had abated. Now, as she gets to learn more about Sarah and her troubled young life, Faith finds the purpose she’s looking for.

. . . a moving story of faith, friendship, hope and trust.

Sarah’s mother died in suspicious circumstances. Her grandmother, Constance, is trying to gain legal custody of Sarah from her father, Harlan Deaver, a man with a habit of sailing close to the edge of morality. He sold Sarah’s beloved mare Midnight to raise money to settle a debt, breaking Sarah’s heart and ruining her rising dressage career in the process. Faith and Sarah contrive the plan of tracking Midnight, to make themselves useful to her new owners and to keep Sarah away from Harlan’s machinations while Constance fights for custody. Faith learns what a phenomenon Sarah and Midnight are on the dressage circuit. Her intuition tells her Sarah is the key to her own salvation, but to get there she and Sarah both must uncover exactly what Sarah witnessed the night her mother died. It also means confronting Robert. Dare Faith trust her intuition for the sake of her own and Sarah’s futures?

Catherine Ryan Hyde uses her consummate knowledge of humanity and the equestrian world to bring a moving story of faith, friendship, hope and trust.

Forever is the Worst Long Time by Camille Pagán

The Shoe Queen by Anna Davis