Book Review: When We Were Bright and Beautiful by Jillian Medoff 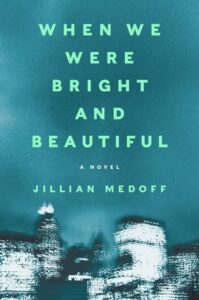 Jillian Medoff delves into the perilous subjects of pornography, consent and sexual assault in her suspenseful novel, “When We Were Bright and Beautiful.” Medoff also weaves a stunning twist into the narrative, which she describes was like sticking “my hand into flames.”

The story is narrated by Cassie Quinn, raised by the wealthy Quinn family after her parents’ death. Lawrence, a friend of Cassie’s father, offers to raise Cassie, and his wife, Eleanor, who supports him in the endeavor. As a young child, Cassie is inseparable from her adoptive brothers, Billy and Nate, and she readily accepts Lawrence and Eleanor as her new family.

… narrative skillfully focuses on someone who will do anything for affection and acceptance, even if it is forbidden.

At age 23, Cassie is at Yale working on her PhD when she receives a call from her brother Nate urging her to return to the family home in the Upper East Side of New York. Billy had been arrested on suspicion of beating his former girlfriend to unconsciousness in a park and then sexually assaulting her while she was passed out. People who witnessed the event had called 911. This will go bad, Nate says: “He’s had rich-people problems … the whole trifecta: rich, white, Ivy League athlete,” all of which will evoke disgust, not sympathy.

But Cassie views her brother Billy, a pre-med student, as a gentle person who certainly was falsely accused. Then, when Lawrence insists Billy take a plea, the family becomes divided. Eleanor has plenty of money and will do whatever she needs to do to keep her son out of jail.

The suspense and tension unfolds in the courtroom during the trial where defense attorney Peter DeFiore skillfully maneuvers around the issue of pornography and instead targets the credibility of the rape victim.

Cassie’s character is masterfully developed. She desperately misses her biological mother who died from alcoholism after her father passed. And Medoff’s narrative skillfully focuses on someone who will do anything for affection and acceptance, even if it is forbidden.

The Song Reader by Lisa Tucker