In A Lonely Little Room: How It Feels To Be A Writer

ASK THE EDITOR In A Lonely Little Room: How It Feels To Be A Writer

Writing is a convoluted business. Not just the business of the business, but the actual fashioning of a book, which is something quite different from putting words on paper. Anybody can write a book, no?

Sure, anybody can type or scrawl enough of those words to fill up a standard-sized bound set of pages. Why, even journaling has grown by leaps and bounds thanks to all the recovery movements, and I’m not in any way discounting that. But such is not a book. Nor is the convoluted (and often chaotic) first few drafts of a novel (even if your spouse claims it is). A true book is a beast that has undergone countless incarnations before being finally tamed and presented to outside eyes, much less before seeing the light of a printing press.

As anyone who has tried writing can second, the initial inspiration is just the place from which you start.

The psychological aspects of writing are such that most people who continue on in the process are probably garden-variety crazy. I mean, think about it; here’s a job description for you. Wanted, worker who will:

1). Set grandiose goals, with some insane notion of actually realizing them.

2) Willing to work all hours, especially those in the dark of the night when some idiosyncratic character quirk wakes one from a peaceful and much-needed sleep, demanding to be immediately jotted down or risk the trauma of being forgotten

3). Remains willing to work in complete obscurity for long periods (months into years) before anyone sees the first curly cue of word

4). Can tolerate an even much-longer time frame before said product is introduced to the public

5). Answers all the gleeful questions of "Oh! You’re writing a book!" from well-meaning friends and relatives with a simple and final, "Yes."

6). Can tolerate the litany of down-the-nose looks from that same group when said book isn’t a best seller, or hasn’t even seen print, years later

7). Responds to repeatedly being humbled to the knees by rejection with perseverance (okay, so this is a bit idealistic. Insert hours ad infinitum of self-doubt and whining before perseverance, but those only to oneself and closest friend)

8). Realizes that those in the business of the profession (agents, editors, the sales department, booksellers, reviewers) consider said workers to be a dime a dozen, and that the former and THEY alone are the sole reason that books sell at all

9). Can endure # 8 without at some point on the meandering journey throwing overripe rutabagas at any or all of the above (considered, while humorous to competitors and often colleagues, to be exceedingly bad form)

10). Works well with a rejection/criticism ration to pats on the back of 100:1. Okay, if one is that lucky

11). Can completely distance oneself from the idea of writing and making a living being considered in the same sentence

We’ll just stop there. The list could continue into the next millennium, but you get the picture.

The point here being that writing is pretty brutal business, all the way around. Which is probably why of the ten thousand not-already-famous folks every day who say, "I’m gonna write a book," about five of them actually begin it. And of that five in ten thousand, perhaps a fraction of one percent puts words on paper, and of that, one-one-thousandth of those finish. Amazing when you think of the hundreds of thousands of manuscripts that roll through New York each year. So at the very least, everyone THINKS he can write a book.

Because we have this perception that anyone actually can. Yeah, simplest thing in the world. Why, look at all the celebrities writing novels (which of course, are almost all actually penned by real writers, but why quibble with technicalities). Or tell-all bios (ditto). I watched an interview with a famous running back who’s biography had just come out, as he stated, with all seriousness, that he’d put in probably a hundred hours on the book. As if that were an enormous amount. His co-author (that person who actually slaved over those words), was never mentioned. Nor the thousands and thousands of hours said person put in. You bet—ANYone can write a book.

But the real reason REAL writers put in the seemingly endless hours of learning and doing and fighting the market is a different thing entirely from striving for fame (although that too has its appeal), or fortune (okay, so one does learn quickly that there is no glamour in poverty). The answer comes from the same place that some folks run race horses rather than raising Hereford cows. It’s all about feeling compelled to strive for a flash of beauty; a brush with greatness. To grasp for a thing that if just for a second, is bigger and grander than you are; to want a blanket of roses more than beef on the table. It’s about dreams that won’t die.

It’s why we do what we do in spite of all odds, braving those looks and swallowing that rejection. And, it’s why somewhere as we speak, in some lonely little room, someone out there is producing greatness. 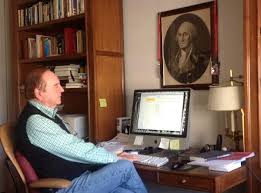 The Art of Fiction: Revision Decisions!