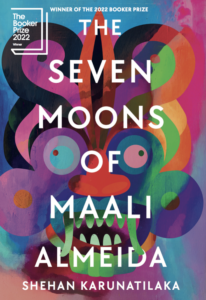 The Seven Moons of Maali Almeida,

Published by Sort Of Books (August 2022)

Shehan Karunatilaka has won The Booker Prize of 2022 for his second novel, The Seven Moons of Maali Almeida. The novel is a searing, mordantly funny satire set amid the murderous mayhem of a Sri Lanka beset by civil war.

Maali Almeida, war photographer, gambler, and closet gay, has woken up dead in what seems to be a celestial visa office. His dismembered body is sinking in Beira Lake and he has no idea who killed him. At a time when scores are settled by death squads, suicide bombers, and hired goons, the list of suspects is depressingly long.

But even in the afterlife, time is running out for Maali. He has ‘seven moons’ to try and contact the man and woman he loves most and leads them to a hidden cache of photos that will rock Sri Lanka.

The Seven Moons of Maali Almeida was announced as the winner of the Booker Prize 2022 on October 17 at a ceremony in London. 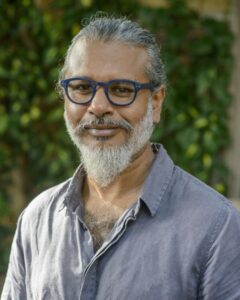 Shehan Karunatilaka emerged onto the global literary stage in 2011, when he won the Commonwealth Book Prize, the DSL, and Gratiaen Prize for his debut novel, Chinaman. The book was declared the second-best cricket book of all time by Wisden.

Born in Galle, Sri Lanka, in 1975, Karunatilaka grew up in Colombo, studied in New Zealand and has lived and worked in London, Amsterdam, and Singapore. He currently lives in Sri Lanka. His songs, scripts, and stories have been published in Rolling Stone, GQ and National Geographic. He has worked as an advertising copywriter and played guitar in a band called Independent Square.

The Seven Moons of Maali Almeida, was announced as the winner of the Booker Prize 2022 on October 17 at a ceremony in London.

About the Booker Prize

The Booker Prize is the leading literary award in the English-speaking world and has brought recognition, reward, and readership to outstanding fiction for over five decades.

Each year, the prize is awarded to what is, in the opinion of the judges, the best-sustained work of fiction written in English and published in the UK and Ireland. It is a prize that transforms the winner’s career.