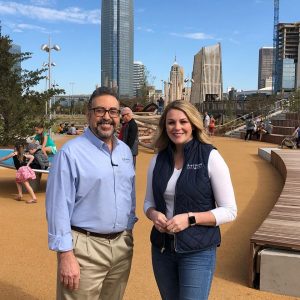 Beginning Saturday, the state’s official travel and tourism television show will for the first time be under contract to broadcast in the Sherman-Denison/Ardmore-Ada market.

The show will air on ABC Texoma each week.

“KTEN has a proud legacy of serving southern Oklahoma viewers and knows that the quality content that is featured within Discover Oklahoma will be well watched and appreciated,” said Joel Scarbrough, creative services director at KTEN Television. “We feel the series will be an asset to our programming, and are excited to add Discover Oklahoma to the weekend line up on ABC 10 (10.3) Saturdays at 6:30 p.m.”

This move expands the show’s coverage area within southern Oklahoma.

“We are so excited about this added market,” said Barbara Merckx, executive producer of “Discover Oklahoma.” “Each week, ‘Discover Oklahoma’ shows off the best of our beautiful state. The addition of ABC Texoma will help us to show more viewers all there is to do and see in Oklahoma.”

“Discover Oklahoma” is broadcast throughout much of Oklahoma. It is currently contracted to air on KFOR, “Oklahoma’s News Channel 4” in Oklahoma City; KTUL, “Oklahoma’s Channel 8” in Tulsa; and KSWO, “7 News in Lawton” on Saturday nights at 6:30 p.m. The program can also be seen on several network affiliates, local cable and independent stations throughout Oklahoma, Kansas and Texas. Viewers are advised to check local listings as broadcast days and times for those stations vary.

The show is hosted by award-winning entertainment and lifestyle reporter Dino Lalli, a McAlester native, and Lauren Nelson, a former Miss Oklahoma 2006 and Miss America 2007 who is from Lawton.

Full episodes of “Discover Oklahoma” and individual stories can be viewed on the show’s website, DiscoverOklahomaTV.com, and on its YouTube channel at YouTube.com/DiscoverOklahoma.

About the Oklahoma Tourism & Recreation Department
The Oklahoma Tourism & Recreation Department works to preserve, maintain and promote the state’s natural assets and cultural richness through tourism. The Department’s Travel Promotions division administers programs designed to build awareness of the state as a destination and educates on the economic importance of the Oklahoma travel and tourism industry. The staff also oversees the agency’s marketing and promotions efforts along with operating Tourism Information Centers located at major entry points around the state. To learn more about the Department, visit TravelOK.com.