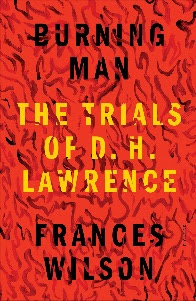 New York, NY; May 15, 2022 – Biographers International Organization (BIO) takes great pleasure in announcing the winner of the 2022 Plutarch Award for the best biography published in the English language in 2021 – the only international prize of its kind judged exclusively by fellow biographers.

The award goes to BURNING MAN: The Trials of D.H. Lawrence, written by Frances Wilson, and published by Farrar, Straus and Giroux.

In the opinion of the five judges Frances Wilson’s account of the wandering life, relationships, loves and hates of the writer David Herbert Lawrence is so freshly written, so critically honest, so intent on reaching into the difficult heart of one of the greatest prose-writers of the twentieth century in English, that it will be a model for such investigative biographical illumination in the future. It is a tour de force in its delineation of genius. In its imaginative structure, its allusions, and its use of Dante’s Divine Comedy as a kind of poetic guide, it is a demonstration of the golden art and craft of modern biography. Like Lawrence’s own work it is always passionate, intense, revelatory, and compellingly original – a biography any biographer would be proud to have composed.

The 2022 Plutarch Committee consisted of five esteemed biographers: Nigel Hamilton (Chair), Heather Clark, Gretchen Holbrook Gerzina, Catherine Reef, and Carl Rollyson. Together they considered over 150 titles from the US and UK. The top ten biographies were announced in March 2022 and from those were chosen the five finalists, announced in April.