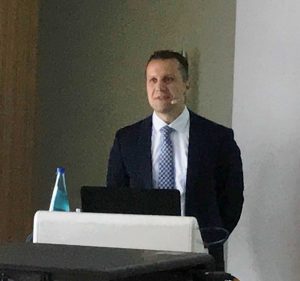 At the European and International Booksellers Federation annual conference at the Frankfurt Book Fair yesterday (October 2019) , Thomas Höppner (pictured above), a lawyer who specializes in European Union and German competition law and intellectual property law, provided an overview of past antitrust investigations against Amazon, a look into current investigations into the company and some predictions about what might appear in the months and years ahead.

Höppner began by noting that Amazon has, relatively recently, begun to co

me under increasing scrutiny from antitrust enforcers all over the globe, with investigations “popping up everywhere.” He pointed out that this new wave of scrutiny largely began in the U.S. with a push from the Federal Trade Commission, which he found interesting given that for many years there seemed to be “some sort of protective hand” shielding Amazon.

Although Höppner did report that Amazon is actively cooperating with the investigation, he still offered a “word of warning,” explaining that Amazon may not be actively fighting the FTC because the company may feel that since U.S. antitrust laws are so weak, very little will come of it. Höppner suggested that this sort of cooperation actually “drags out” the finding of the “proper remedy,” which would be the creation of new antitrust laws and regulations–something that Amazon absolutely wishes to avoid.

In discussing past antitrust investigations against the company, Höppner said much of it has rested on Amazon’s dual role as both a vendor/publisher and the owner of the single most important distribution platform for those products. He likened the situation to being both a competitor and referee at the same time, saying that in such cases there is a “very strong incentive to favor your own products.”

He touched on an investigation launched in 2014 that began with a complaint by the Börsenverein, the German book industry association, regarding “parity clauses” in Amazon’s deals with publishers that required the publisher to make Amazon aware of any better deals, terms or discounts that other competitors might be getting. As a consequence of the investigation, Amazon has committed itself to no longer forcing publishers to sign those sorts of clauses, but, Höppner said, “these are quite narrow commitments.”

Höppner also detailed two investigations, one past and one ongoing, regarding Amazon’s marketplace, on which it sells its own and its competitor’s goods. The first was a German investigation regarding Amazon’s dealings with marketplace vendors, and it resulted in Amazon accepting some commitments on things like how and when the company can terminate or suspend a vendor’s account.

Höppner explained that though this now applies to vendors in the E.U., North America and much of Asia, this was “not a game changer,” as new platform-to-business regulations are set to be enforced in the E.U. next summer, and Amazon would have had to accept these things anyway.

The other, ongoing investigation, Höppner continued, is looking into whether Amazon uses data gathered from third-party sales on its platform to then boost the sales of its own products. He described the process as Amazon shifting the “success of pioneers” to itself, and noted “no one else can compete with that.”

On the subject of predatory pricing, Höppner acknowledged that Europe and the U.S. have different approaches–predatory pricing is illegal in America only if prices are then raised in a “recoupment phase,” and he suggested that such a phase may still be ahead. One thing that has yet to be decided in a legal sense, he added, is whether selling certain products below cost in order to hook customers, and then selling them other products at a very high margin, is a form of predatory pricing. Similarly, it has not been decided yet if selling products below cost to acquire data, and then using that data to monetize a different market, constitutes infringement.

Höppner characterized Amazon as a company that does not “just say no,” but so far has “shifted a bit smoothly,” accepting things here and there in order to avoid “full-blown prohibition decisions at any cost.” When asked what the outcome would be of any major, hypothetical antitrust action against Amazon, Höppner said he wasn’t sure. In the U.S., there has historically been more of a focus on splitting up companies as a remedy, but that works well only when there is a clear distinction between infrastructure and service and “no overlaps.” Another possibility would be vertically splitting the company, which in this case might mean Amazon could still own and operate its marketplace, but could not compete directly with third parties on its own platform.

Looking ahead, Höppner predicted that any significant changes that benefit booksellers and publishers will not come from the enforcement of existing antitrust laws but through the establishment of new regulations and the signing of new laws. Current competition law is “so traditional” and “so focused on offline markets,” he said, that a new strategy is needed, and “now is the best time” to express concerns with lawmakers. —Alex Mutter

A Mobile-First Approach to Serial Reading