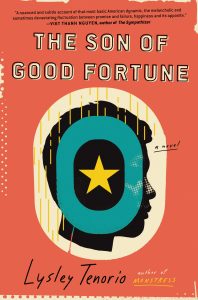 The Son of Good Fortune

When he is 10, Excel’s mother, Maxima, tells him they are TNT – hiding and hiding – they are not in the U.S. legally. He grows up trying to be invisible, living with Maxima, a former Philippines martial arts movie actress and her mentor, Joker. He has a drab life as a teenager in the Bay Area, working at a pizza parlor for a sadistic boss. Then Joker dies, Maxima makes her living scamming men online, Excel meets Sab, a girl who bounces between relatives. When Sab must move to an old hippie community in the southern California desert, Excel goes along leaving his mother for good, he thinks. But things don’t work out as he expects, and he finds he still need Maxima and her various talents.

AUTHORLINK: What gave you the idea for this story and how did it develop?

The novel began with a completely different premise and set of characters (it involved pirated DVD-sniffing dogs, and DVD pirates trying to assassinate them), but as much as that changed, I was always drawn to the mother-and-son relationship.  Those characters became Maxima and Excel, and I developed a story around them.

AUTHORLINK: You start the story with Maxima, but the rest of it is in Excel’s point of view. What was your reason for that?

While we’re in Excel’s perspective through the novel, I felt it was important for the reader to see Maxima acting on her own, to see what a typical night in her life might be like.  I especially wanted a moment for her that was free of judgment or speculation, particularly since what she does is so ethically questionable.

AUTHORLINK: How did you come up with your title?

There was a lot of back and forth between me, my agent, and my editor.  They had a lot of insight into how different kinds of titles might be perceived, and ultimately, we liked the idea of the word “son” being in the title, which is also an indirect reference to a parent, and a nod to Maxima.  The “good fortune” part of the title refers to how Maxima comes up with Excel’s name (following a family tradition, she gives him a name that suggests good things to come), but also suggests that Maxima, in some ways, is Excel’s good fortune, that he might actually be quite lucky to have her as his mother.

AUTHORLINK: What were some of the elements of your story that you researched and what did you do to study them?

Like many, I keep up with news about DACA and the Dreamers, and I read a lot of interviews with undocumented young people.  But at a certain point, I was gathering too much information, and feeling this responsibility to incorporate all I was finding out.  But that ran the risk of turning the book into a kind of political text, so I pulled back from the research, and returned my focus to the real heart of the book, which is the complicated relationship between a son and his mother.

AUTHORLINK: What is Hello City based on?

It’s loosely based on Slab City, an off-the-grid desert community in Southern California.

AUTHORLINK: This is your first published novel. Had you written other novels that haven’t been published yet? What did you write before this that helped you develop your craft to this level?

The Son of Good Fortune is the only novel I’ve written.  My previous book, Monstress, is a collection of short stories.  The short form, I quickly realized, is not a training ground for the novel.  So, writing this second book was a lot of trial and error, and trusting that I’d figure out the structure and pace once I understood what the story was really about.  And really, I think that’s what a writer needs to believe in—the story itself will teach you how to craft it.

AUTHORLINK: How did you pitch this novel and how did your attempt to find an agent and publisher go?

The novel was part of a two-book deal, negotiated by an agent that I’d been working with on my short stories.

AUTHORLINK: What do you hope your readers come away with from your book besides just enjoying the story?

I’m hoping that readers recognize something familiar in the bond Excel and Maxima share, and that it affirms what I think is true for so many of us—that nobody is stronger than your mom.

AUTHORLINK: While I was thinking about these questions, I got sidetracked and started writing an epilogue in my head where Perfecto contacts Jerry years later and “explains” what happened to them. How do you feel about readers not wanting to say farewell to your character and imagining their lives continuing?

I think that’s the greatest aspiration for any writer—that readers finish their books reluctantly, and that their characters linger and live on in readers’ minds long after the final page.

Still figuring that out, but I’m anxious to return to short stories.

About the Author: Lysley Tenorio has had stories in The Atlantic, Ploughshares and Zoetrope some of which have been adapted for production by The American Conservatory Theater in San Francisco and the Ma-Yi Theater in New York City. He has won a National Endowment for the Arts fellowship, a Stegner fellowship and the Rome Prize and has had residencies with the MacDowell Colony, Yaddo and the Bogliasco Foundation. The San Francisco Chronicle named Monstress a book of the year. Tenorio was born in the Philippines and lives in San Francisco where he is a professor at Saint Mary’s College of California.