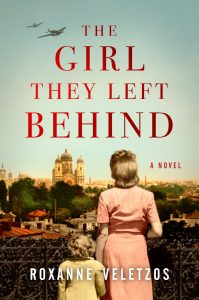 THE GIRL THEY LEFT BEHIND

For Roxanne Veletzos, THE GIRL THEY LEFT BEHIND is an intensely personal story. Her debut novel is a sweeping saga of family and love. The tale takes place in 1941 in war-torn Bucharest and depicts life behind the Iron Curtain during the Soviet Union occupation.

In an Authorlink AUDIO interview, the first-time writer talks about the freezing night in January 1941 when a little Jewish girl is found on the steps of an apartment building in the occupied city.  Roxanne based the story on a real-life orphan girl–the author’s own mother.

With Romania recently allied with the Nazis, the Jewish population is in grave danger, undergoing increasingly violent persecution. The girl is placed in an orphanage and eventually adopted by a wealthy childless couple who name her Natalia. As she assimilates into her new life, she all but forgets the parents who were forced to leave her behind. They are even further from her mind when Romania falls under Soviet occupation.

Yet, as Natalia comes of age in a bleak and hopeless world, traces of her identity pierce the surface of her everyday life, leading gradually to a discovery that will change her destiny. She has a secret crush on Victor, an intense young man who as an impoverished student befriended her family long ago. Years later, when Natalia is in her early twenties and working at a bleak warehouse packing fruit, she and Victor, now an important official in the Communist regime, cross paths again. This time they are fatefully drawn into a passionate affair despite the obstacles swirling around them and Victor’s dark secrets.

When Natalia is suddenly offered a one-time chance at freedom, Victor is determined to help her escape, even if it means losing her. Natalia must make an agonizing decision—remain in Bucharest with her beloved adoptive parents and the man she has come to love, or seize the chance to finally live life on her own terms and to confront the painful enigma of her past.

The novel is filled with strong, dynamic female characters; a dramatic, unforgettable backdrop; passion beyond reason in extreme circumstances; and—above all—a portrait of the triumph of the human spirit. THE GIRL THEY LEFT BEHIND is historical fiction at its best.

Set in a corner of Europe seldom explored in modern fiction, THE GIRL THEY LEFT BEHIND was inspired by two distinct elements drawn from the author’s own life:

(1) Stories of World War II and the Soviet occupation during the Iron Curtain years in her native Romania shared by Roxanne’s mother over the years.
(2) The Unknown—a piece of Roxanne’s family history long lost in obscurity. Before World War II, Romania’s capital of Bucharest was a vibrant, cosmopolitan city, heavily influenced by French architecture and culture—known as the “Little Paris.” While neutral at the beginning of the war, Fascist political forces within the country rose in popularity and power, urging an alliance with Nazi Germany. Rich in oil and bordering the Soviet Union, Romania became a major player in the war, essential to Nazi Germany’s success. In this environment, antisemitism grew and extremist factions such as the Iron Guard garnered public support and appeal.

In 1939, King Carol II was outed from the country along with his Jewish mistress and the throne went to his eighteen-
year-old son, Michael. However, the real power fell into the hands of General Ion Antonescu, one of Hitler’s closest
allies—who handed him Romania’s natural resources on a platter and fielded the third largest Axis army. Although the
Iron Guard (also known as the Legionnaires) was initially part of Antonescu’s cabinet, the two began to clash in late
1940 over ideological differences.

Antonescu, much like Hitler, preferred a more tactical approach and disapproved of the outright plundering and
violence instilled by the Guard. The power struggle, which began two months earlier, culminated in a vicious attack by
the Legionnaires on the Jewish population of the nations’ capital in late January 1941. Thousands were dragged into the streets to be beaten, tortured, and killed, their homes and businesses ravaged, synagogues burned. In a nearby forest, more than a dozen
naked corpses were found in the snow. More than 100 people were brought to the slaughterhouse and hung on meat hooks
to die. The Bucharest Pogrom—and the one in the city of Iasi six months later—were some of the most tragic events of
civilian violence during the war.

In 1945, at the end of the war, Romania fell under Soviet occupation and King Michael—despite toppling General
Antonescu and turning the tide against the Nazis—was forced to abdicate. A new era of terror began, and under
Stalin’s rule hundreds of thousands of lives were destroyed. Those most targeted were former bourgeois families who
presented a threat to the new regime and were to be annihilated—either by imprisonment or deportation or by
being stripped of all they possessed and being left to starve.

THE REAL GIRL LEFT BEHIND

During the Bucharest Pogrom and the subsequent days of near civil war, a little girl was found on a doorstep unable to speak. As she remained unidentified in the days that followed, she was brought to an orphanage. Inside the pocket of her dress, a simple note was discovered, which read: “In anguish and despair, we release this child into the hands of God, with hope and faith that she may
be saved.”

The mystery surrounding her mother’s biological parents provided Roxanne with a fundamental and powerful storyline:
• What circumstances led to such a heart-wrenching decision?
• Did they survive the days of the massacre?
• And if they did, what might have happened to them after the
war?
Despite many attempts to gather information through a number of international organizations, a thread back to them and their fate
was never found.

Thus began a journey through time, a story sourced in fiction as much as in real life, fueled not only by this dramatic event but
also by all those that followed in its turbulent aftermath. While the journey of Roxanne’s biological grandparents was rooted in imagination, the hardships suffered by her mother’s adoptive family was sourced in truth—picking up, in a sense, where the other one ended—with the same underlying themes of resilience and courage in the face of tyranny.

ROXANNE VELETZOS was born in Bucharest, Romania and moved to California with her family as a young teen.
She always loved books and writing, which became a refuge as she began writing short stories about growing up
in her native Eastern Europe while transitioning to a new culture. She holds a bachelor’s degree in journalism from
California State University, Northridge and previously worked as an editor for a number of Fortune 500
companies. She began working full time on THE GIRL THEY LEFT BEHIND, her first novel, in 2011 after her father
passed away. She lives in Marin County, California with her husband and children.

THE GIRL THEY LEFT BEHIND 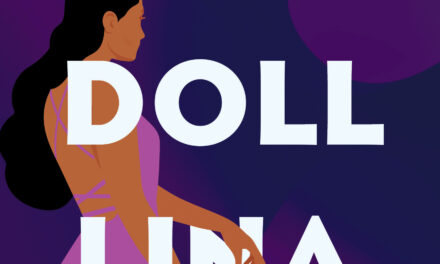 Novelist Elizabeth Dewberry Faces All the Scary Places Inside