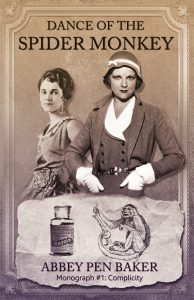 Author Interview with Rebecca Morean, author of Azimuths, We’ve Got This, The Bench, and the Abbey Pen Baker detective series (In the Dead of Winter, Dance of the Spider Monkey, and After Bohemia), among others.

Interview Submitted by Shuly Cawood
author of the memoir, The Going and Goodbye (Platypus Press, 2017)

SC: What was the inspiration behind your new detective series?

RM: I have always loved the Jeremy Brett interpretation of Sherlock Holmes on PBS Mystery. It had been years since I read the canon as a teenager and after watching a “Scandal in Bohemia,” one problem fairly leapt from the story line. If Holmes was such an admirer of opera, how could he not know who Irene Adler was and then make Watson look her up in his files? That one question led to a book series and speaking engagements at conventions where I’ve delivered papers explaining Holmes’s greatest feat: telling his version of the story to Watson that protects his affair with Irene.

SC: What have you enjoyed most about writing it?

“I found that if I don’t have access to the internet, I almost get writer’s block.”

RM: The research. I love to research and I particularly love putting real people who lived, both famous and not, as characters in the books. Mary Howe, who is featured in several, is an elderly retired opera singer herself and old friend of Irene’s. I got to meet her real granddaughter at a book signing in Brattleboro, Vermont. Patrick O’Keefe is also a Brattleboro local who ended up in the books. But there are famous people as well, and many women who have been overlooked by history. I love researching how Penn Station smelled in the 1920s or how sanitary napkins hit the market after WWI. Many of the books incorporate real historic events as well.

SC: What has surprised you the most about writing this series?

RM: How much the research moves the plot. I found that if I don’t have access to the internet, I almost get writer’s block. I have to be able to see the outfit Myrl is wearing or look up if a particular slang word was used during the era before I leave the scene. The other surprise is one true to all writing I think: it’s that your brain really does figure it out. What you put down on page 10 will really surface as important on page 116 and you had no idea. It’s like your brain was ahead of itself. I love that about writing. The final surprise is how much my readers seem to like Myrl and Faye. I was really unprepared for this part and it has proven sweet and wonderful to engage with readers from 13 to 85.

SC: Why self-publish? What have been the payoffs of doing so?

RM: I enjoy the control and the process. I also like that I can advertise, promote, offer specials, write free short stories, etc. without a publisher telling me what I can and cannot do. That’s the big payoff. The hurdles are making sure you do it right: stick to your own deadlines, hire a good editor, find a fantastic cover artist, figure out the marketing aspect. I am learning in leaps and bounds, but having been published by major publishers, independent publishers and now self-publishing, I truly enjoy the last.

SC: For other books, you’ve written under a pen name and also not used one. What are the pros and cons of using one?

RM: I use a pen name mostly for audience recognition…and to keep up a conceit. Abbey Pen Baker is the author name I use when writing the Myrl Adler Norton series about the daughter of Sherlock Holmes and Irene Adler. The conceit is that my (Abbey’s) great aunt, Faye Martin Tullis originally wrote these books. Now out of print, I am merely the editor. When the first book, In The  Dead of Winter, came out, St. Martins had to field questions from readers and bookstore owners who couldn’t find the out-of-print books anywhere. It was really funny. I write light romance under Rebecca Morean and literary fiction under R. A. Morean.

SC: Name three detective novels that have inspired you.

RM: I can’t name novels, but I can name authors: Agatha Christie (who appears as a character in a few of the stories), Nero Wolfe, Laurie R. King and of course, Sir. Arthur Conan Doyle. Oops, that four!

SC: What is one piece of advice you have for aspiring young writers?

“Don’t overthink it. Just write. Write because you have to…”

RM: Don’t overthink it. Just write. Write because you have to and because you want to even if you think you have nothing to say. You do.

Mick Brown: Tearing Down the Wall of Sound, The Rise and Fall of Phil Spector