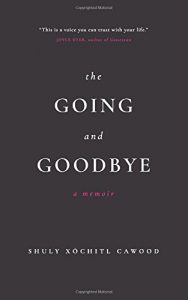 To understand love, you must first understand power—the balance of it, when to give it up, when to take it back. – Shuly Xóchitl Cawood, The Going and Goodbye: A Memoir

Memoir offers a vivid portrait of lived life including moments when one’s experience yields meaning, understanding and a roadmap of how to move forward. Shuly Cawood’s memoir in essays, The Going and Goodbye, is such a memoir. It focuses on love, lost and found.

The title comes from an essay that is no longer in the collection about leaving her boyfriend to go to Mexico. “I used the phrase the going and goodbye in that essay. The book is about saying goodbye, letting go, leaving home and finding home,” said Cawood.

When I write it comes as whatever it is going to be . . .

When Cawood first started writing stories from her life, she pictured a traditional memoir, but the stories emerged as short essays. “I never have a choice about that. When I write it comes as whatever it is going to be,” said Cawood.

She let the stories flow, publishing pieces of what would ultimately become her memoir in journals including The Louisville Review, Full Grown People and The Rumpus. “Writing the book was like a spider’s web, one thread would lead to another thread,” said Cawood.

She drew from personal journals and letters. Cawood was left with the memoirists’ dilemma of acknowledging the subjectivity of memory. She deals with this directly in the text acknowledging that she is telling her own version of events and speculating about what others in the scene might be feeling.

The book took six years to develop. She started working on writing down her memories after attending the Antioch Writers Workshop one summer and then began shaping the memories into essays. When she had a large enough collection of essays, Cawood saw that they shared certain themes regarding love and loss.

My greatest challenge was making sure that I developed the characters well enough, myself included.

“My greatest challenge was making sure that I developed the characters well enough, myself included. To get a better handle on that I read Ann Patchett’s Truth and Beauty and Joan Didion’s The Year of Magical Thinking,” said Cawood.

As a student in the Queens University-Charlotte low residency MFA program, Cawood worked with memoirist Natalie Kusz and poet and memoirist Kathryn Rhett to shape the collection of essays into a coherent narrative arc within and across essays. This included getting rid of duplicate material, building description and character and making sure the essays were in past tense.

The idea is to have the narrator in the present looking back on the past, using reflective narration . . .

“The idea is to have the narrator in the present looking back on the past, using reflective narration,” said Cawood.   She loved the work of organizing the essays and used a series of index cards to move essays around asking which would draw readers in and keep them reading.

“It was a challenge because within the essays themselves the reader moves back and forth in time,” said Cawood. She said the biggest thing that helped her was being away from the manuscript for a few months and getting fresh eyes.

The revision process was comprehensive. Each essay was revised multiple times, as was the book as a whole. She sent the work to independent publishers opting to publish with Platypus Press in England. When the collection was accepted by Platypus, there were at least five more sentence-level revisions.

Cawood credits her success to tenacity. “I got the best advice from writer Matthew Goodman at Antioch Writers Workshop. He told me he graduated from an MFA program but is now one of the only ones from his class who is still writing professionally. He said it wasn’t because he was the best writer. It was because he refused to leave the party. He made me promise I would still be writing in five years.”

Pleased to have her memoir on shelves, Cawood is putting finishing touches on a mixed genre chapbook coming out from Red Bird Chapbooks in 2018.

Shuly Xóchitl Cawood is the author of the memoir, The Going and Goodbye (Platypus Press, 2017) and the forthcoming poetry and prose chapbook, None of Them Home (Red Bird Chapbooks, 2018). She has an MFA from Queens University, and her writing has been published in The Rumpus, Zone 3, Fiction Southeast, Cider Press Review, and The Louisville Review, among others. Her website is www.shulycawood.com.

All That Man Is, A Book of Uncommon Power

A Talk With DBC Pierre, Creator of Vernon God Little