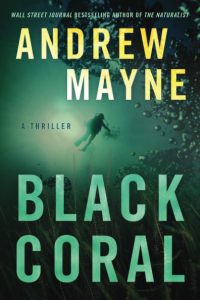 In this Authorlink video interview, Andrew talks about his work, the creative process, and how he got his first start by self-publishing.

In BLACK CORAL female heroine Sloan McPherson and the Underwater Investigation Unit have discovered a van at the bottom of a murky Florida pond. Sealed inside the watery tomb are the bodies of four teenagers who disappeared thirty years ago after leaving a rock concert. To authorities, it looks like a tragic accident. To Sloan, it looks like murder.

Every piece of evidence is starting to connect to a string of cold case vanishings throughout Florida. Clue by clue, Sloan navigates the warm, dark waters where natural predators feed, knowing that the most dangerous one is still above the surface—nesting and dormant.

But when a fresh young kill is found in the Everglades, Sloan fears that her investigation has reawakened a monster. How can she catch someone who’s a genius at hiding in plain sight? By acting as prey. The dangerous gambit is working—only too well. She’s being lured into a deception of the madman’s own design. Has Sloan set a trap for a serial killer? Or has he set one for her…

Andrew Mayne has dazzled readers across the globe with his thrillers featuring lead characters with fascinating backgrounds in crime forensics. The plots are complex, with meticulous attention to scientific and investigative detail—a tribute to the level of research and study Mayne puts into every novel. A world-renowned illusionist with thousands of passionate fans (who call themselves “Mayniacs”), Mayne applies his skill with sleight of hand and visual distraction to his storytelling,thereby creating shocking twists and stunning denouements.

While he thinks about his books for a long time, and meticulously outlines them, he can usually turn out a manuscript within a few weeks.  He started his writing career by self-publishing and built a substantial online audience before receiving offers from traditional publishers.

Andrew is an Edgar-nominated author, Thriller award finalist, star of Shark Week and A&E television’s Don’t Trust Andrew Mayne.  He has published some 45 books and videos on the art of illusion, has written more than a dozen thrillers and works of science fiction, as well as books on writing.

Patricia Schultz Strives to Capture The Spirit of A Thousand Places

The Language of Solitude